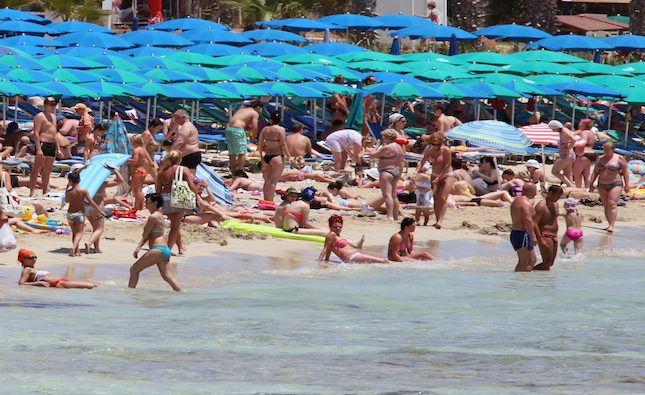 According to the Times on Friday, citing travel experts, a “wall of money” will be spent on trips to Cyprus after the island became the first to open its borders without restrictions to vaccinated Brits.

The sudden surge in bookings has come since the government announced that the policy will be in effect from May 1, reinvigorating the battered tourism industry.

It follows a similar arrangement reached with Israel on February 14 – but Britons have, for decades, accounted for more international tourists than any other country.

The deputy tourism minister Savas Perdios announced the deal on Thursday but later clarified that this would only apply to British nationals who have received both doses of the vaccine, the second vaccine being administered at least seven days prior to the date of travel.

He also qualified that whether British people do travel here was contingent on the UK government’s policies.

“It is very good news for us, it gives us hope that we can see the return of British holidaymakers in the summer,” Chrisemily Psilogeni, the general director of the Association of Cyprus Tourist Enterprises (Stek), told Cyprus Mail.

According to the Times, tour operators are attempting to drive up bookings by offering more than a quarter off the price of holidays from mid-May — when the ban on nonessential international travel could be lifted.

On Friday, it said, Tui was offering 26 per cent off a seven-night all-inclusive stay at the five-star Atlantica Aphrodite Hills resort near Paphos, with holidays costing £955 including flights.

The five-star Olympic Lagoon Resort in Ayia Napa was also available for £1,038 per person, a 20 per cent discount.

With one million people in the UK have already received the second Covid-19 jab, the potential market is growing every day.

The Times quoted Paul Charles, chief executive of the PC Agency, a travel consultancy as saying: “All of our research is showing that most British citizens are now starting to turn from being dreamers to bookers. That’s what’s happening as more confidence returns. Cyprus won’t be the first, there are many more imminent.

“And as countries say they are starting to open up, that wall will be spent,” he said.

After almost a year of being confined to their homes, many are desperate to escape the lockdown blues.

“At the moment, there is nothing else to do in terms of a deal with the UK,” Psilogeni said. “The more people will get vaccinated over there, the more passengers will be able to come to Cyprus without restrictions. The deal will be especially significant in the upcoming summer.”

Psilogeni also added that other countries will probably follow Cyprus’ example and try to reach an agreement with the UK on tourism.

“We are the first EU country to have reached a similar deal with another country outside the EU. I expect others will follow our lead, she said.

Authorities in Cyprus will still take random samples at the airports, including among those having been vaccinated.

Those vaccinated must still observe all protocols on arrival – masks and distancing.

Psilogeni added that hoteliers and people working in the tourism industry are trying to convince the government to accept rapid tests instead of just PCR tests from foreign arrivals in Cyprus.

“Should the government decide to accept rapid tests on arrival, many potential visitors will no longer be discouraged from coming to Cyprus by the high costs of undergoing PCR tests.

“We have not yet had a reply from the government on this topic, but we are cautiously optimistic,” Psilogeni said.

Earlier this week, the government said that British tourists who have not been vaccinated would only be able to avoid a quarantine on arrival if the UK is categorised as a ‘green’ country.

The odds of that happening, however, appear to be very low.

“It is too early to tell whether the UK will become green in May, we need to wait and see,” a health ministry spokesperson told Cyprus Mail.

“However, it is unlikely that people arriving from the UK will not have to quarantine at all by the time the deal will be enforced.”

“What we can say, however, is that mandatory quarantine at state-designated facilities for people arriving from the UK will end at the end of March.”

The new country category system kicked in on March 1 for EU countries, and on April 1 for non-EU countries.

According to Travel health experts, Practio in an announcement on Friday, data predicts the amount Brits were due to spend in Cyprus in 2021 as more than £725 million, but with holidays mostly cancelled in 2020, that number could be significantly higher if Cyprus make a move to allow Brits ahead of other countries.

Forecasts predicted 874,213 visits to the country in 2021 by Brits, a number which could be eclipsed after not accounting for the pandemic and cancelled travel in 2020. The data shows that Brits could spend £830 per visit to Cyprus in 2021, the announcement said.

Commenting on the research, Dr Jonas Nilsen, managing director and co-founder of Practio said: “We wanted to pull this exhaustive research together to understand UK travel trends over the past ten years, but also to give us an idea of what this means for travel in the future. Travel was mostly out of the question in 2020 and many of us are hoping for its return in 2021. By predicting future trends, we can better equip travellers and businesses that thrive off tourism by helping them to prepare for what’s to come and how they can make the most of Brits’ travel habits.

“It’s also been great to see some of the emerging trends and how travel is changing, we’re seeing the go-to destinations start to change with more money being spent in countries further afield, which should be a good sign for the future of the travel industry beyond the pandemic.”

The full research can be found here – https://practio.co.uk/travel-health/articles/popular-holiday-destinations-for-brits-when-travel-opens-up