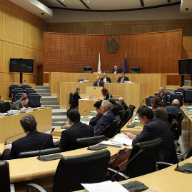 The economy's prospects are expected to continue to gradually improve though substantial risks still exist, mostly related to the banking sector whose prospects are crucial to recovery, the Finance Ministry said in a report to the House recently.

The report, entitled Economic Developments 2014 and Prospects 2015-2017, accompanied the state budget for 2015, which was submitted to parliament.

“According to the baseline scenario, in the medium term, the prospects of the Cypriot economy are expected to continue to gradually improve,” the report said. “… The economy is expected to start recovering in 2015 and thereafter.”

However, destabilising factors still loomed, mainly related with the prospects of the banking sector, which “are crucial for economic recovery.”

“Portfolio deleveraging, the level of non performing loans, and borrowing rates, constitute important indicators for the future course of the sector,” the report said.

The state expects to collect some €5.9 billion in 2015 while expenditure will reach €6.6 billion.

The main sources of revenue are direct and indirect taxes, expected to reach around €4.9 billion in 2015 or 83% of total revenues. The rest concerns sale of goods and services, as well as transfers, estimated at €999 million.

Revenues from direct taxation as a percentage of GDP will remain at the same levels as this year – 14% – while indirect taxes will make up 17.1% of GDP compared with 16.8% in 2014.

On the expenditure side, payroll, pensions and bonuses, make up the biggest category though expected to be slightly less next year at €2.50 billion compared with €2.58 in 2014.

Personnel expenditure will see a 2.5% reduction in 2015 due to a freeze in recruitment and the elimination of vacant positions.

Pensions and retirement bonuses will also drop by 4.0% due to a slowdown in early retirements compared with previous years.

The increase is mainly due to VAT returns, procurement of pharmaceuticals, and higher spending on lighting and heating.