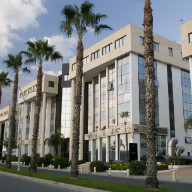 Building permits up in October 2016

Building permits were up in October 2016, in number, total area and value, according to data from the Statistical Service Cystat.

The number of building permits authorised by the municipal authorities and the district administration offices in October were 467.

During the January–October period, a total of 4,160 building permits were issued compared to 4,180 in the corresponding period of the previous year.

The number of building permits issued in the January–October period in Nicosia and Famagusta Districts was up while it fell in the Limassol, Paphos andLarnaca Districts.