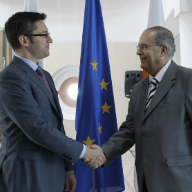 Bulgaria and Cyprus are discussing ways to enhance cooperation in the energy sector, said Foreign Minister Ioannis Kasoulides after a recent meeting with his Bulgarian counterpart Kristian Vigenin in Nicosia.

Vigenin referred to the potential role Cyprus could play in the so-called south-north energy corridor. He said both Bulgaria and Cyprus had similar interests that needed to be pursued in a coordinated manner and on a bilateral and EU level.

The two ministers held a tete-a-tete meeting earlier at the Foreign Ministry, which was followed by extensive talks between the delegations of the two sides.

“We consider the presence of the Foreign Minister of Bulgaria in Nicosia as an acknowledgment of the value of enhanced bilateral cooperation between our countries, in effectively tackling the several challenges faced by the EU today,” Kasoulides said.

Asked if Cyprus could help mediate a solution in Iraq, being the closest EU country in the region, the minister said: “There is nothing to mediate.”

“These people are putting in danger the whole of civilisation, when they say that women have to remain uneducated and stay at home,” he said.

Their actions go against the fundamental cornerstones of the civilised world and they would not listen to anyone, he added.

In his comments, Vigenin expressed Sofia’s appreciation for Cyprus’ efforts in recovering from the economic crisis.

“We want to see a financially stable and economically strong Cyprus,” the Bulgarian Minister said. “We have agreed to further continue our cooperation, not only on a bilateral level, but also in EU institutions,” Vigenin added.

He noted Bulgaria’s total dependency on Russian gas deliveries and the gas pipeline that goes through Ukraine. “We feel a certain danger for our gas supplies,” Vigenin said.

He acknowledged that his country could not “fully replace Russian gas” but he said it was important at the same time for Sofia to secure other sources.

Bulgaria and Cyprus were discussing the potential for strengthening their energy cooperation, he said, referring to the creation of a ‘south-north corridor’ for energy. Bulgaria was working closely with its neighbours, and especially Greece and Romania in an effort to strengthen and interconnect their gas links and create the energy corridor.

“Cyprus can play an important role in the project, delivering gas to LNG terminals in Greece and from there to Bulgaria, Romania and Central Europe,” Vigenin added, although he acknowledged that at this stage it was merely an idea.