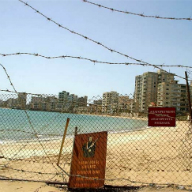 As the Cyprus issue remains at a standstill, four prominent business organisations from Cyprus, Greece and Turkey agreed on their own joint declaration calling for the resumption of peace talks with economic benefits for all parties involved.

The Cyprus Employers and Industrialists’ Federation (OEV), the Turkish Cypriot Businessmen’s Association (ISAD), the Hellenic Federation of Enterprises (SEV), and the Turkish Industry and Business Association (TUSIAD) held a joint press conference in Nicosia’s buffer zone to call for negotiations to begin “in good faith to achieve a comprehensive and enduring settlement of the Cyprus problem.” Reading out the joint declaration, OEV head Filios Zachariades said that the four organisations “strongly stress that the negotiations between the communities in Cyprus pose a sound opportunity to reach a mutually accepted solution to the long-standing Cyprus problem.”

The four underlined that a solution will generate a high level of economic cooperation among all parties involved, which in turn will impact upon the prosperity of the entire region. “Triggering economic and social progress in Cyprus and the economic welfare of the Eastern Mediterranean as a whole, will undoubtedly hinge upon the economic integration of the island,” said Zachariades. Speaking through an interpreter, TUSIAD head Muharrem Yilmaz said that after many initiatives had failed, the four organisations got together to put forward their joint will for anacceptable solution to the Cyprus problem which “is one of the oldest problems still remaining without a solution in the international arena, with a history of more than half of a century. As TUSIAD we have been saying that a solution to the problem would bring economic prosperity and will help eliminate all the diplomatic problems,” he said.

Yilmaz noted that international actors see a solution as a positive development as it would bring stability to the region. The Turkish business representative also referred to developments in the energy sector, describing the issue as “a significant opportunity” for regional economic integration and increased prosperity. “If we can make good use of this picture through cooperation and joint activities and common activities, we believe that all parties will win in the end. However, if the energy issue is taken to increase the disparity between the sides then we fear that this will make a solution even more difficult,” he added.

ISAD head Metin Shadi said there was an urgent need from both business communities on the island for a solution. While people have generally become jaded regarding the chances for a solution, “business people’s weapon is hope and looking to the future”, he said. His organisation has already visited many Greek Cypriot politicians in an effort to persuade them not to focus on the past but “look to the future and grab the chance”. Until now, he argued, the business world in both communities was “living in the world of Alice in Wonderland, not the real world”, adding that, “after reunification, it will be the real world with a lot of opportunities”.

For his part, SEV deputy head Christos Komninos said he was pleased by the initiative taken by OEV and ISAD. “We really think this is a good start and we feel that if the basic ingredients, which are good will, trust and a belief in the future are at the desired level, there is no reason for not being successful,” he said.