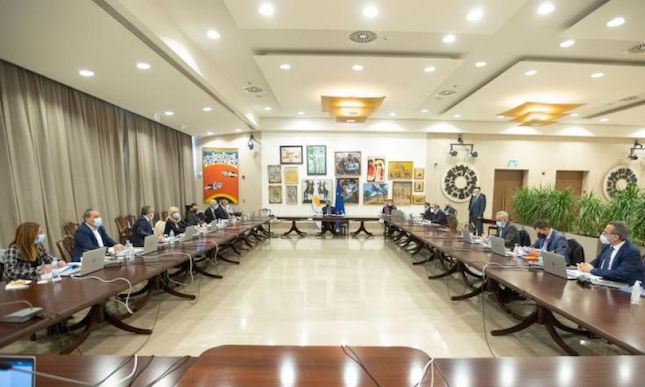 The Council of Ministers today approved small changes to the covid measures in place, including lifting the prohibition of entry in food and drink establishments and theatres to unvaccinated minors between 12 and 17 years of age and extending the "test to stay" measure to the National Guard. New measures also include changes to the criteria for employees of homes for the elderly and a reduction to five months - the allowed time that can elapse before a booster shot is required.

During the Cabinet`s meeting, Health Minister Michalis Hadjipantela presented the proposals of the Scientific Advisory Committee which were discussed at a meeting yesterday, during which the contact tracing team`s data, the state hospitals figures and the rate of vaccination coverage were analyzed and reviewed.

According to the Epidemiological Surveillance Unit`s data, between 22 and 28 January 2022, 15,494 positive cases were recorded in the community and a daily increase of cases is present in all age groups, apart from the 50 - 69 age group, it added.

The Ministry is continuing its appeal to citizens to be responsible and to strictly follow health protocols.

According to the press release, the new changes will be in effect from February 4 onward.

As from February 4 onward, unvaccinated children aged 12-17 will now be allowed to enter food and drink establishments (i.e. restaurants, etc.), cafeterias and theatres provided they present a negative PCR or rapid test valid for 72 hours and must be accompanied by a fully vaccinated parent or guardian.

In addition, booster shots will be required after 5 months following the second (for 2 dose vaccines) or first dose (for single-dose vaccines).

The "test to stay" measure will also be implemented in the National Guard, the press release adds. The date of implementation of the measure will be announced following consultation with the Ministry of Defense.