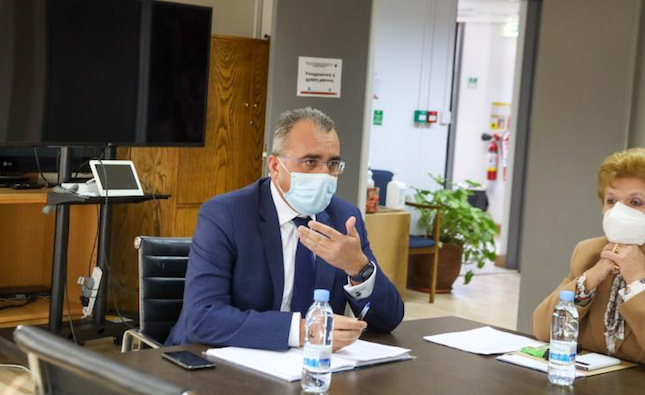 Cyprus enters a new phase of relaxations of COVID measures next Tuesday. The Cabinet decided Wednesday that a safe pass is no longer needed in certain places and the quarantine period is reduced to seven days from 10.

Michalis Hadjipantelas, Minister of Health, said after the Cabinet`s meeting that infected citizens could exit the isolation on the 7th day if they have a negative rapid or PCR test and this enters into force on March 8th.

Also, close contacts of patients, who could not enter isolation, i.e. because they had to take care of a minor, they could also undergo a rapid or PCR test the day that the infected person is exiting his/her quarantine and if the result is also negative, they could also end their isolation.

As regards the safepass, the Cabinet decided the new categorizations of various establishments according to a risk factor and the citizens will know what the protocol for entrance is for these places.

Health Minister said that there will be four categories of high risk, medium risk, low risk and places where the presence of citizens is for a short period of time and therefore no safepass will be needed.

He said that announcements with details will be made later in the day.

The Minister said that beginning on March 8, the capacity in retail sales stores, in casinos and gyms is increased while the capacity in wedding and christening gatherings is also increased to 500 people given that the measure for 1 square meter per person is maintained.

The Cabinet also decided to lift the school parades’ restriction and the Minister said that a protocol will be drafted with instructions.

Hadjipantelas said that the stable and clear improvement of epidemiological indices, the decrease in hospitalizations and in the positivity rate prove that the measures the government took to curb COVID spread have yielded results.

This, he said, allows us to keep our promise for relaxations following the suggestions of the scientific committee. He also said that the excellent response of people to the call for vaccinations and the adherence to the protocols resulted to a protection shield and an optimist vibe that this pandemic adventure will end soon.

But he noted that the road ahead is still long and cooperation and adherence to measures are needed so that we will all be able to take further steps and return to our normality.