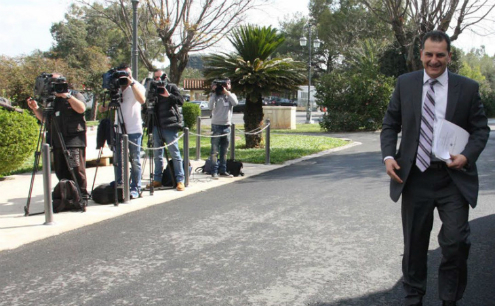 The new cabinet consists of three new members, replacing DIKO affiliated ministers and one reshuffle, as Energy Minister Lakkotrypis remains in his position.

Government spokesman Christos Stylianides announced that the director of the Institute of Neurology and Genetics Philippos Patsalis would be the new health minster. Education would be taken by academic, Costas Kadis, communications and works by economist Marios Demetriades while current minister Tasos Mitsopoulos would be moved to defence.

The other ministers are to remain in their positions. This also includes Energy Minister Giorgos Lakkotrypis. None of the other three DIKO ministers – education’s Kyriacos Kenevezos, health’s Petros Petrides and defence’s Fotis Fotiou were reappointed despite the fact they cut ties with the party.  In addition, President Nicos Anastasiades appointed Odysseas Michaelides former head of the department of control of the Communications and Works ministry as the new auditor-general, replacing Chrystalla Georghadji who is being appointed Central Bank Governor.

Irena Georgiades, adviser to Finance Minister Harris Georgiades has been appointed as the new Commissioner for the Reform of the Public Service. She replaces Emmanuela Moushioutta Lambrianidou who resigned following DIKO’s departure from the coalition. Lambrianidou is the sister of Marinos Moushiouttas, DIKO general secretary and party leader Nicolas Papadopoulos’ close associate.

Anastasiades also appointed Iosifina Antoniou, head of women’s organisation GODISY, as the Commissioner for Equality. The post is newly created and aims at addressing issues of gender discrimination. GODISY is the official women’s wing of governing party DISY. Equality issues were under the care of the office of the Ombudswoman Eliza Savvidou but did not receive much attention due to the massive workload Savvidou’s office had to deal with. In announcing the appointment for the new Commissioner, the government spokesman said that creating a separate post was mandated by the EU.

Anastasiades also appointed Nestoras Nestoros as the Greek Cypriot representative to the Committee for Missing Persons after the resignation of  Theophilus Theophilou for health reasons. Dr Tula Onoufriou was appointed head of the Cyprus National Hydrocarbons Company and Elena Vassiliadou as the new chief at the National Gas Public Company DEFA. Penelope Athinodorou Mantis was appointed chairwoman of the State Fairs Authority and Angelos Loizou as the new head of the Cyprus Tourism Organisation, Kadis’ previous position.