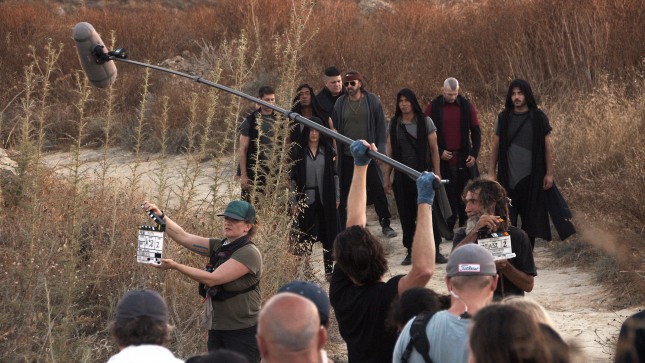 Cyprus’ fledgeling film industry, dubbed Olivewood, is slowly getting back on track after the coronavirus outbreak and difficulties faced with the government’s incentive scheme have been overcome.

Following the successful completion of “Jiu Jitsu” by Hollywood director Demetri Logothetis, his production team are laying the ground for their next film Man of War, also to be shot entirely in Cyprus.

Man of War is officially in the pre-production stage.

The film produced and directed by Logothetis is expected to start sometime towards the end of November or early December with preparations to start shooting in Cyprus underway.

With the team set for their second venture in Cyprus, there are plans to invest $125 million in this and another five Logothetis films.

“We have officially started the preparations for the production of our new film. Right now, we’re finalizing our budget, looking for the locations to shoot, organizing and preparing contracts,” producer Chris Economides told the Financial Mirror.

He will also be collaborating with producer Todd Garner, former president of Walt Disney Productions.

The Man of War script is written by Gary Scott Thompson, the writer of the blockbuster franchise Fast and Furious movie saga.

The team will be working with Highland Film Group which is behind successful films starring the likes of Gerard Butler, Keanu Reeves and Bruce Willis.

Originally planned to start filming in April earlier this year, the team’s plan was put on ice following the coronavirus outbreak and difficulties faced with the government’s incentive scheme.

Producers of the first film Jiu Jitsu, filmed entirely in Cyprus, said they had to knock on several doors to get financing, after being rejected from sponsors and banks in Cyprus because the incentives certificate issued was not accepted as collateral.

“As producers, we had to finance the film with funds from abroad as Cyprus banks were not willing to finance the film, an indication they felt they may not get their money back as the certificate we presented them could not act as a guarantee as they are not bankable,” said the producer of Jiu Jitsu.

The matter, however, was resolved at the end of July with the government agreeing that guarantees given to filmmakers could be issued to guarantee loans from Cyprus banks.

“The industry has taken a big blow but several projects including ours are back on track. We are currently trying to resolve problems that arose because of the pandemic, such as ensuring that actors and crew are able to get to Cyprus.”

Economides explained that securing tickets and visas during the coronavirus pandemic is a challenge as the production will need to get crew and actors coming from the States to Cyprus insured.

“Which is a bit of a hiccup, as no insurance company will insure them at the current stage of the pandemic”.

He argued that pandemic or not, Cyprus should continue promoting its film industry through its audiovisual investment incentive scheme set up to draw in big productions from more advanced countries such as Hollywood.

According to the scheme, the government has allocated a total of €25 million for the ventures it might fund annually.

The scheme provides Cypriot and foreign producers with incentives such as cash rebates and/or tax credits of up to 35% on qualifying production expenditures and also provides tax allowances of 20% for investment in infrastructure and equipment.

Appearing confident over what the scheme has to offer Cyprus, Economides said the film incentives must not be allowed to fail.

“The production (Jiu Jitsu) hired more than 60 people active in the local industry, from actors to screenwriters and costume makers.

Another 160 people were hired to carry out jobs facilitating the production.

A total of 220 Cypriots were employed by the production team, whereas our legal obligation was to hire just six Cypriot nationals.”

“Development of the film industry gives rise to new investment opportunities such as the building of infrastructures like studios, exhibition and conference centres, media distribution, editing and sound suites, production services equipment…”

A film industry source told the Financial Mirror that big studios interest in Cyprus has been rekindled, and more filming projects to be announced down the line.

The source said, “in such times when the traditional pillars of the Cypriot economy are being shaken, we need to diversify our investment basket. What better way than the audiovisual sector?”

The source argued that with or without a coronavirus pandemic the request for audiovisual content will remain high.

“If people are not able to return to cinemas soon, then they will continue craving for content turning to platforms such as Netflix.

Cyprus needs to up its game, offering the international filming industry a credible solution. The island is practically an outdoor studio.”