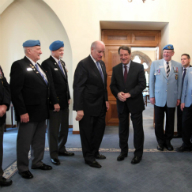 His comments came shortly after meeting Canadian Veterans Minister Julian Fantino, on an official visit to the island with ten veterans of the Canadian UNFICYP contingent for a week of events to mark Canada’s participation in the force. As well as meeting President Nicos Anastasiades and Defence Minister Tasos Mitsopoulos, Fantino also met Lakkotrypis. The two ministers agreed to organise trade missions between the two countries, part of a drive to enhance bilateral relations.

Speaking on state broadcaster CyBC, Lakkotrypis confirmed that Fantino conveyed to him the interest displayed by Canadian outfit Sea NG in the interim gas tender launched by Cyprus. Sea NG specialises in CNG transportation. The company has developed its proprietary Coselle System. In 2006 Sea NG received approval for construction of a CNG ship from the American Bureau of Shipping. To date no such vessels have been built.

After his meeting with Anastasiades, Fantino said they had talked about “great opportunities” for Cyprus to grow and “the kinds of things that can happen between Canada and Cyprus to create win-win situations. It’s 50 years of Canadian involvement in Cyprus. We are here visiting with ten of our veterans who actually served here over the fifty years of work that Canada has done here,” said Fantino.

Over 25,000 Canadian troops served in UNFICYP since 1964 and 28 lost their lives on the island in that time. Canadian troops were instrumental in defending NicosiaAirport in 1974 and saving it from falling into the hands of Turkish troops. As part of the events, a photo exhibition on the Canadian peacekeeping mission was opened at Famagusta Gate while a documentary ‘Our Man in Tehran’ will be shown at the same venue. It tells the true story of the Canadian Ambassador to Tehran, Ken Taylor, who helped six American diplomats escape during the hostage crisis at the US embassy in Iran in 1980. There will also be a lecture on the Canadian mission in Cyprus at the EuropeanUniversity by historian Dr Greg Donaghy.

In 1993 Canada withdrew most of his troops from Cyprus butstill retains a small presence at UNFICYP. The delegation’s visit coincides with the return of one of the last groups of the Canadian armed forces mission to Afghanistan. “The members of the Canadian Armed Forces in Cyprus left an indelible mark of our troops but also on the history of both Canada and Cyprus,” said Fantino He said Canada will do everything it could to support the current talks process, which he had discussed with Anastasiades. “We want to encourage him – and I did actually on behalf of Canada – to continue along that path” Fantino said. “This is the only way to go. I am very pleased to see how committed he [the President] is to this lasting solution that we are all very hopeful it will eventually happen,” he added.