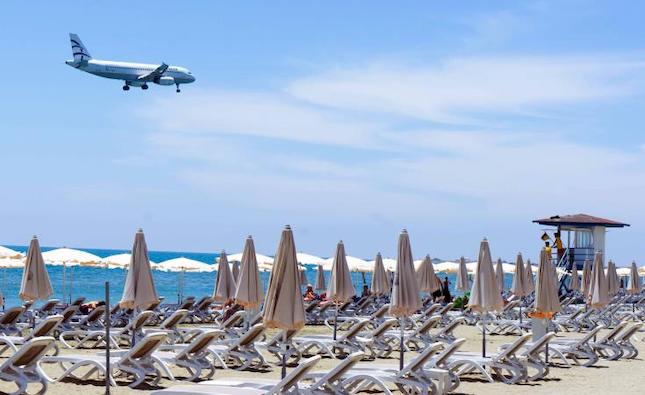 As Europe’s airports struggle with mass staff shortages as the travel sector faces a ‘summer of discontent’, Cyprus has escaped the crisis with fewer scheduled flights cancelled or delayed.

A difficult environment for airlines, in general, is forming, which threatens to hinder attempts to increase Cyprus’ air connectivity, as fuel price increases have been added to make a dangerous mix.

Stakeholders are worried this could lead to a domino effect on the island’s tourism industry.

In a comment to the Financial Mirror, tourism boss Savvas Perdios said the new conditions that airlines are working under means that difficult decisions could be made, including cancellations of flights or even routes.

“We must understand that every business today operates in an unprecedented situation.

“The operating environment is very difficult, so we will not criticise any airline for making decisions different from those it wanted to make”.

He added that airlines are in a better position to address the issues of flight cancellations and their own business challenges, noting that authorities expect no more problems to arise for the island’s connectivity.

Cyprus’ airport operator Hermes boasts that a chaotic cocktail of increased fuel costs, staff shortages and strikes has not dragged down passenger traffic.

In comments to the Financial Mirror, Hermes Airports senior manager Maria Kouroupi said that in June, Larnaca and Paphos airports had only seen 5% of flights affected.

“The average delay in flight time was just over half an hour.

“There were, of course, cases where flights had to be rescheduled due to delays at other airports.

“This had mainly to do with the fact that in some cases, delays at other airports had violated the crew’s flight time limitations and rest requirements,” said Kouroupi.

She explained that in those cases, flights had been rescheduled for the next day.

On average, companies providing services to airports had laid off 30% of their staff, while others had reduced salaries.

“When the alarm was over, these companies had trouble rehiring their staff or finding replacement”.

A source from a ground handling company at Cyprus’ airports told the Financial Mirror that firms had not laid off employees as a government furlough program supported them.

Kouroupi said that Cyprus airports recorded 2% of scheduled flights in July and August have been removed.

In absolute numbers, seats lost up until October are around 100,000, which is not expected to significantly affect tourist arrivals during the high season.

According to media reports, Larnaca-based TUS Airways called off some scheduled flights due to the chaos in Europe and increased fuel prices.

From July, the airline stopped its Paphos-Athens flights, a route that had received a warm reception.

At the same time, it reduced the frequency of the Larnaca-Preveza (Greece) flight to one a week in August, while the Larnaca-Kalamata and Skiathos route only lasted two months.

In February, in a presentation of the company’s flight schedule, there was also mention of flights to Brussels and Eilat airport; however, this didn’t happen.

In addition, the Kefalonia, Lyon, Strasbourg and Toulouse route is not operating.

From Paphos airport, the Paris route continues until August; the destinations Düsseldorf, Hamburg and Nuremberg are not included in the schedule.

Reports have Wizz Air; also Cyprus-based, reducing the frequency of some routes such as flights for Paris, Athens, and Thessaloniki.

In August, the Larnaca-Paris flight will operate twice a week instead of three. The flight continues in September and October with the same frequency – twice a week.

The Larnaca-Athens flight will be operated six times a week in August instead of seven times a week. The same goes for the Larnaca-Thessaloniki flight.

Cyprus travel agents are concerned that flight cancellations in the EU due to staff shortages and connection losses may have a domino effect on tourism.

Charis Papacharalambous, the Association of Cyprus Travel Agents (ACTA) spokesperson, told the Financial Mirror that long delays and flight cancellations have not yet cost the tourism sector, as tourists are not put off by delays and cancellations.

He argued that delays at EU airports could cause more problems down the road as some flights are being cancelled, with holidaymakers pushed on to other flights.

This forces agents and hoteliers in Cyprus to scramble to reschedule holiday packages.

“This is creating a domino effect…it could mean that some tourists will get discouraged and either cancel their booking or avoid planning to go abroad for their summer holidays.

“We hoped that Cyprus tourism would be getting a UK boost following the war in Ukraine.”

Cyprus looked to increase flows from the UK, traditionally its strongest market, Israel, and emerging players such as France, to make up for a loss of 800,000 tourists from Russia and Ukraine.