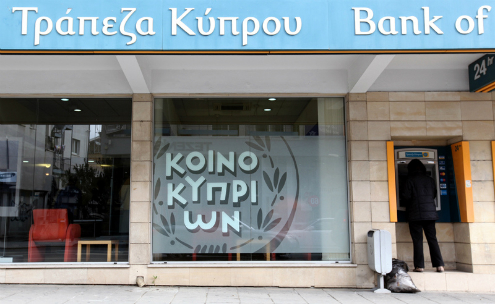 Capital controls must be lifted as soon as possible: bank association

Capital controls imposed on the Cyprus banking sector should be lifted as soon as possible, provided the sector is stabilized, the island’s bank association said.

“We are in the eurozone and there cannot be two separate euros,” Bank Association director Michael Kammas said in an interview with the Cyprus News Agency. Capital controls have been imposed following a €10 billion bailout agreed late March that entailed closing Laiki Bank and forcing losses on deposits over €100,000 to pay the recapitalization of Bank of Cyprus (BoC).

Michael Kammas said the Association had argued that no capital controls should apply on domestic transactions but disagreed with the view that restrictions should be limited to BoC. “We are still in shock because what was happened here was unprecedented. We bailed-in the island`s two systemic banks instead of bailing them out,” he said. Kammas said that since the onset of the global financial crisis in 2008, the EU gave eurozone banks €4.5 trillion in the form of financial assistance granted to member-states, but in Cyprus’ case it took in uninsured deposits to cover needs worth around €10 billion.

However, Cyprus still has prospects for recovery. If Cyprus implements the provisions of a memorandum containing state expenditure rationalization, as well as structural reforms both in the public and the banking sector “we could achieve a second economic miracle,” Kammas said. “Despite the Eurogroup`s harsh decision, our public debt will be sustainable and there are prospects,” he added. Cyprus still has advantages such as the tax and supervisory framework, the services sector, a network of double taxation treaties, well-educated workforce and a corporate tax rate which, at 12.5%, is one of the lowest in the EU.