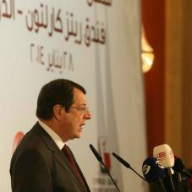 Capital controls to be lifted ‘soon’

Capital controls imposed on the Cyprus banking system in the wake of the eurogroup decision are to be completely lifted in the near future, says President Anastasiades.

Addressing the Cyprus-Qatar Business Forum in Doha, Anastasiades said Cyprus was witnessing increased inflows from foreign residents. “Of course, our efforts to restructure the banking system are still ongoing, but as a result of the two positive evaluations received from the Troika, we have the aspiration to soon lift most of the restrictions on transactions and capital movement,” he said. The president, winding up a two-day charm offensive to woo Qatari investment to Cyprus, said that despite the economic difficulties created for Cyprus by last year’s Eurogroup Agreement, the country still retains all of the competitive advantages that set it apart from most investment destinations. These include, among others, a competitive tax system, a low 12.5% corporate tax rate and an extensive network of Double Tax Treaties that includes Qatar.