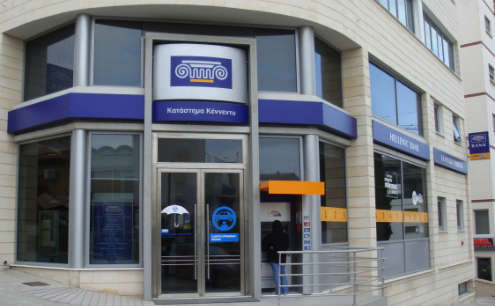 International credit rating agency Capital Intelligence has affirmed the long term and short-term ratings of Hellenic Bank at ‘BB-’ and ‘B’, respectively.

The outlook is stable, indicating that the ratings are unlikely to change over the next 12 months in view of the bank’s large stock of Non-Performing Exposures (NPEs) and significantly impaired capital position due to the high level of unprovided NPEs.

According to CI the bank’s core financial strength (CFS) is supported by its excellent liquidity metrics as evidenced by its large customer deposit base and high level of liquid assets, continued improvement in loan asset quality metrics and higher level of earnings.

The ratings reflect Hellenic’s market position as the second largest bank in Cyprus with an enhanced retail franchise following the acquisition of the good operations of the Cooperative Central Bank (CCB) in September 2018.

CI points out that the main challenges for Hellenic are the still high NPE ratio and only moderate NPE coverage ratio, the consequent continued impairment of the capital base and the high level of real estate exposure reflecting its large book of residential mortgage loans.

It is also noted that HB’s business model has improved significantly following the absorption of CCB’s extensive customer base. This has also strengthened HB’s position as the leading retail and SME bank in Cyprus.

It is added that the assets acquired contributed to more than doubling the size of the bank as well as increasing its market share in both loans and deposits.

The balance sheet composition remains conservative with a moderate level of net loans, a large portfolio of debt securities (mainly Cyprus government bonds), and a good level of liquid assets.

“The quality of this exposure also remains weak despite some recent improvement. An offsetting factor is the recovery of the real estate market in recent years – something that should improve the value of collateral”, it added.

“While the Bank is focused on further reducing NPEs, this could be hampered by amendments proposed by opposition members of parliament to the July 2018 Foreclosure Law which would weaken the position of lenders.”

CI said a key historical strength of HB has been its prudent balance sheet management, which has provided the bank with excellent liquidity metrics.

“These metrics have strengthened even further with the acquisition of CCB’s largely retail customer deposits and a larger portfolio of Cyprus government bonds. The latter was equivalent to more than four times the bank’s total equity at end H1 2019.”

Hellenic’s capital ratios have also strengthened noticeably, especially after the rights issue in March 2019, well ahead of regulatory requirements and the ratios of its largest peers.