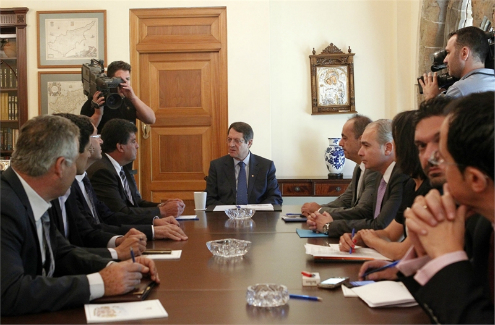 The single casino licence which the government intends to issue will apparently provide for an integrated resort in one district plus two more branches, or “satellite casinos” in two other districts.

That was the understanding that Paphos stakeholders gleaned from a meeting with the President, according to what Paphos mayor Savvas Vergas later told reporters. Vergas said each of the three casinos would be built in different districts, thus satisfying three districts instead of just one. The initial Cabinet decision in July provided for one licence for an integrated casino resort rather than several licences for smaller operations. The Cabinet based its findings on a study carried out by private-sector consultants and commissioned by the Cyprus Tourism Organisation. But that decision had the districts’ respective local authorities on tenterhooks as to who would get to host the coveted business venture.Paphos in particular had intensely lobbied the government to rethink its decision for just one casino resort. It seems that the idea now for a “mother ship casino” and for two more “casino branches” – all belonging to the same investor – represents a compromise.

Expressing satisfaction at the government’s approach to the casino project, Vergas said that it would be left to the investor to pick the location(s) of the casino(s). The investor would “have the right” to create two casino branches in addition to the main casino resort, the mayor said. And it would be possible for the casino branches to be built before the main one, he added. It was not clear whether the creation of these two branches would be mandatory or optional; the Mail was unable to get confirmation either way.

Giorgos Leptos, head of the Paphos Chamber of Commerce and Industry, welcomed the establishment of three casinos in total as it would spread the wealth among districts. In this way, he said, the districts not clinching the integrated resort would still be able to draw tourists. It’s understood that the government intends to soon hire a consultant who will draft the terms and specifications for the casino tender. When the administration first announced its plans back in July, it said it would fast-track the procedure so that a licence could be granted within 12 months. Boasting a huge bed capacity, an integrated casino resort would also offer a number of auxiliary services, including theme parks, restaurants, shops, and malls. On paper, the project itself is projected to bring in an investment of between €600-800 million, half a million new tourists, and create over 3,000 new jobs.

In addition to creating jobs in construction and then in catering and other services, the project would generate revenue from the gambling tax imposed on the licensee.