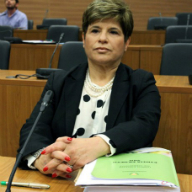 CB chief to reinstate trust in banks and deal with NPLs

New CCB Chief says its goal is to consolidate trust in the banking system, dealt a serious blow after a lender had to be shut down and deposits were seized to recapitalise another in 2013.

Chrystalla Georghadji said she recognised the exceptionally difficult conditions the country was going through.

“I share the worries, insecurities, and mistrust tormenting households and afflicting businesses on a daily basis,” she said, 24 hours before officially taking over.

Georghadji said the primary strategic goal was to consolidate trust in the banking system, which depended on others matters like ensuring adequate liquidity in the market and managing the problem of non-performing loans, “which will be given immediate priority.” Strengthening corporate governance was another priority.

Non performing loans have reached 50% of the total loans. At €22 billion, they represent 135% of GDP.

“It is a huge challenge. Cyprus, our country, needs everyone’s help,” she said, adding that she was aware of the tendency of people and capital to flee.

“I am assuming the obligation to make, and I will make, every possible effort to tackle these difficulties substantively and decisively.”

Georghadji, 58, became the first woman central banker in the eurozone when she was appointed by President Nicos Anastasiades in early March.

She replaces Panicos Demetriades who quit two years into a five-year term, citing “mainly … personal and family reasons”. He also cited difficulty in working with the board of directors – most of whom were appointed by the present government.