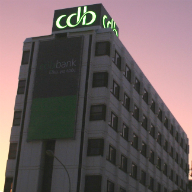 The Cyprus Development Bank (cdbbank) will strengthen its presence in Cyprus with new offices and a branch in Limassol.

According to reports, the new office comes in response to the banks strategic objectives to attract business in the international banking sector and the consolidation of its name in the local market.

Slated for operation in early May 2016, the new offices will house the International Banking Operations Department. A branch of cdbbank will operate on the ground floor in June, according to reports.