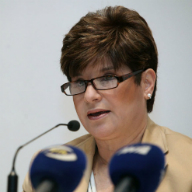 Governor of the Central Bank of Cyprus Chrystalla Georghadji has turned up the heat on the Bank of Cyprus’ board of directors, setting a three-day ultimatum for the bank to confirm adherence to the originally agreed timeframe for a capital increase.

In a letter addressed to board chairman Christis Hasapis dated July 1, 2014, Georghadji reminded the BoC board that on May 30 the board had agreed to issue new capital by early August 2014. The board’s intention had also been confirmed to the CBC through twice-weekly updates provided at the CBC’s request since June 10, she said.

But last week’s board decision to defer the issue of fresh capital at a later point in time contradicted these commitments, Georghadji charged. The BoC board had decided to “explore certain options” without specifying a timeline for completion. State radio reported on Wednesday that some of the bank’s shareholders sought to push completion of the capital increase to September – instead of August – in order to raise the funds required.

“As has repeatedly been explained to you, strengthening the bank’s capital base was deemed necessary by the Central Bank, both in light of the upcoming results of the on going stress tests, and in order to satisfy a term in the troika Memorandum of Understanding, which calls for maintaining capital buffers above and beyond the requirements of the First Pillar (of the Basel II accord),” the letter said.

Georghadji listed three demands to the board, asking for confirmation within three days that all three would be implemented, but falling short of including the consequences of failure to comply.

“In order to safeguard the interests of depositors and/or creditors, (the CBC) calls on the Bank of Cyprus to confirm the following within three days of receipt of this letter:

All original timelines with regard to capital issue will be followed as confirmed by the Bank of Cyprus to the Central Bank (...) concluding in the capital issuance date of August 8, 2014.

The issue will limit claw-back provisions to a maximum 20%.”

But Finance Minister Harris Georgiades argued that attracting foreign capital into the economy is a dire necessity, thus justifying the ceiling on existing shareholders’ participation. It is estimated that even if the claw-back limit were to be achieved, existing shareholders’ stakes in the bank’s equity would be diluted by 15%, prompting talk of a ‘new haircut’ by some on the BoC board.

Archbishop Chrysostomos, one of the bank’s existing shareholders through the conversion of the Archbishopric’s uninsured deposits to BoC stock, on Wednesday joined ranks with those who opposed government intervention in the bank’s internal affairs. Though he was careful to avoid naming names, he criticised Georghadji and the government’s decision to overrule the board and implied that they were actively favouring foreign hedge funds who want to buy the bank on the cheap.

“I don’t want to accuse anyone, but it appears that the feast is still on going,” Chrysostomos said. “I believe the board could come together and decide on the bank’s recapitalisation needs, as well as the share price – for me it will be very suspect if foreign funds step in and set the price, because a low price will mean that they will grab the bank for peanuts. Is this what we want?”

Chrysostomos went on to include Georgiades and Georghadji in his criticism, saying they should allow the board to decide freely.

“The Cypriot people have endured too much clumsiness,” he said cryptically. “Some will need to stop shaping developments and exerting pressure, and let the board take ownership for its decisions.” Asked who he was referring to, Chrysostomos merely said that “they know who they are.”

In this tense atmosphere, and despite bitter feelings by board members who feel sidelined, the BoC board refrained from offering any public remark. However, it was reported in local media that the board will be convened on Friday to discuss Georghadji’s letter.