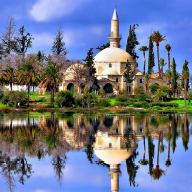 Certificate of Excellence 2014 for Hala Sultan mosque by TripAdvisor

The mosque of Hala Sultan in the coastal town of Larnaca has received the certificate of Excellence for 2014 by the well-known and established travel website TripAdvisor, used by millions of travelers around the world.

According to a press release by the Department of Antiquities of the Ministry of Communications and Works, the certificate is based entirely on the comments of visitors following their visit to the mosque of Hala Sultan during the previous year.

The Department of Antiquities considers this distinction of special importance since it is the result of the experiences of the visitors and their subsequent comments.