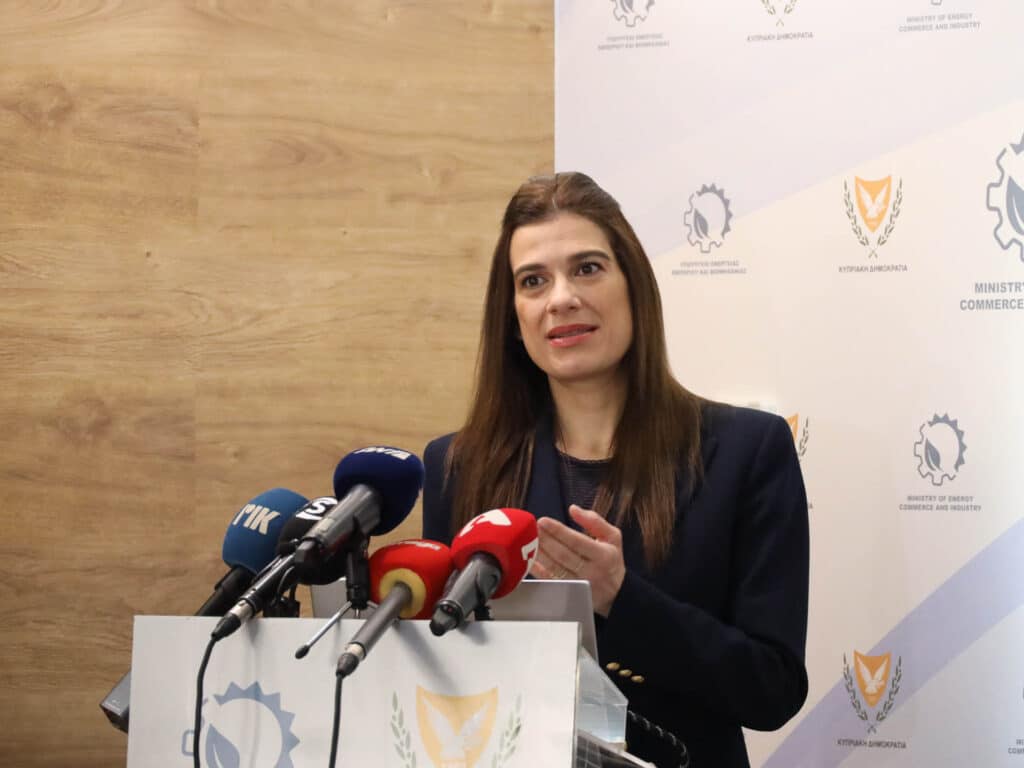 Pilides said that the plan will be submitted to the ministry for approval, and that the hope is that it is similar to the initial plan so it can be approved and a final investment decision taken. Chevron is also set to conduct another drilling in the Aphrodite field in the first six months of 2023, the minister said.

She added that the development plan will be checked by the ministry to ensure that the funds Cyprus would gain from any potential exploitation of the field would reflect the share owed to the country. The minister also said that Eni will be submitting their development plan for block 6 soon. During drillings conducted from May to August 2022, the consortium Eni-Total Energies found 2.5 TcF (trillion cubic feet) in block 6. She added that the companies are all meeting their obligations and timelines as set out in contracts with the government.

As an example, Pilides said that the Italian Eni has been active in Egypt since 1950 before proceeding to the exploitation of the Egyptian deposits, for which infrastructure was needed. In her report on the work of the ministry, Pilides highlighted the developments in the Cypriot EEZ over the past two years, including the licencing of block 5 to ExxonMobil in 2021, the company’s drilling in block 10 in December that year, and its second drilling in March 2022.

Pilides said that other plans include possibly creating a potential forum with the companies working the Cypriot EEZ, to better exchange knowledge of findings and check-in with the ministry on the processes. When asked about possible synergies between the companies, Pilides said that potential cooperation could include the use of a drilling rig that arrives in the area for one well and for another company’s site, as well as shared infrastructure, which can be used for different deposits. She stressed, however, that “both the companies and we agree that we will not engage in discussions about projects that delay the development plan,” adding that the concern is to exploit our natural resources as soon as possible.

Regarding the solution of a floating terminal for the exploitation of Cyprus deposits, the minister said that they are optimistic about examining this possibility and have asked for it to be examined because it also upgrades the role of Cyprus itself in terms of exploitation and export to European destinations. In response to a question, she said that the issue of the floating terminal will be considered during the preparation of the development plan of Eni, which is also considering this possibility. But she noted that Eni has natural gas transmission facilities in Egypt.

Commenting on business and investments, Pilides said that in the last two years 1,600 foreign businesses have been registered in Cyprus. Most of these companies work in the fields of IT, financial services, industry, trade, hotels, renewable energy, teaching, shipping, and health services, she said. According to Pilides, 10,000 residence and work permits were given to staff from Israel, Ukraine, Lebanon, the UK, Russia, Belarus, the US, China, and Australia. She said that these all occurred thanks to the work done by the business facilitation unit, which is set to have many services moved online in 2023.

However, Pilides emphasised that without energy storage for RES, the use of photovoltaics will reach a “ceiling” of utilisation since this energy will be lost. For this purpose, she said, the government is promoting €80 million funding plans for large storage projects which will be combined with a competitive tender so that photovoltaic parks are combined with storage.