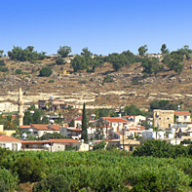 The drop in property prices by up to 30% in the coastal village of Pyla, has attracted investment interest from Chinese and Lebanese citizens.

In fact in the last few years, there has been a noticeable increase of interest from foreigners concerning the purchase and investment of properties in the bi-communal, picturesque village of Pyla.

According toPyla community leader Simos Mitides, the price of luxury properties in Pyla two years ago was €300,000 but today has dropped to €200,000.

Mitides said that unfortunately, even with the drop in prices, Cypriots cannot afford to buy the properties, especially young couples due to the situation with the economy, even though the town needs young people to move to the area.

He said that there are many difficulties in securing loans for Cypriots due to the situation with the banking sector. Mitides said those who benefit from reductions are mostly foreign investors in Cyprus, who take advantage of the significant drop in prices.

According to the Pyla community leader, there is interest to purchase houses in the area mainly from Chinese and Lebanese citizens. He said that they are attracted to Pyla for many reasons, including the community’s character of a small village with traditional houses, its close proximity to the sea but also the fact that it is close to Larnaca town centre.

He said that Chinese and Lebanese are also interested in Oroklini. He added that if Cypriots had the opportunity to get a loan from banks, this period would be ideal to purchase a property or investment on an immoveable property in the area of Pyla.

The coastal village of Pyla is one of the most developed residential areas northeast of Larnaca.