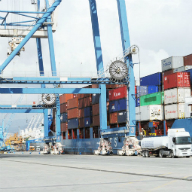 Chinese COSCO isamong companies which will be invited to submit details of their plans for taking up sections of Limassol port commercial operations, the state radio reported recently.

It quoted Cyprus Port Authority President Alecos Michaelides as saying that the Ministry of Transport has made a short list from among over 70 operators who had responded to in invitation in June for the commercial development of Cyprus' main port of Limassol.

He added that COSCO is among the companies, which will be invited to present detailed plans before final tenders are invited in November 2015. He did not provide more details.

Cypriot authorities say they are confident that the opening of the Suez Canal extension will result in an increased activity at the Limassol port, which lies at a strategic point in the eastern Mediterranean across Suez.

Limassol port operations are among the first state owned assets slated for privatization under the terms set by international lenders for a €10-billion (about $11 billion U.S.) bailout deal Cyprus concluded in March 2013.

Michaelides, who is also Permanent Secretary of the Ministry of Transport and Communications, said the concession of the port operations to private business will help improve port services, increase income and help the general economy.

He said successful bidders will operate under the supervision of the Cyprus Port Authority, which currently administers and operates the port.

Transport Ministry sources said the process for the concessions at the Limassol port is expected to be completed by March next year.