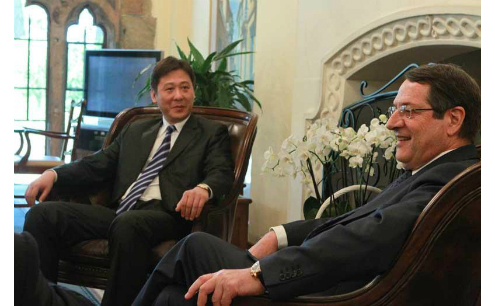 Chinese plan to invest €1.5 billion in Cyprus, showing strong confidence in the prospects and potential of the country.

Cyprus President Nicos Anastasiades received a delegation of the Hong Kong-based company ‘China Glory National Investment’, which is investing in the Venus Rock Golf Resort project in Ha Potami, in the district of Paphos. The delegation was headed by Chinese investor Charles Zhang and businessman Theodoros Aristodemou of Aristo Developers Ltd, one of the largest developers in Cyprus.

Earlier this month Aristo Developers and Venus Rock Estates Ltd, subsidiaries of real estate investment firm Dolphin Capital Investors, sold their interestin the golf resort to the Hong Kong investors for €290 million. Aristodemou said the Chinese investors have confidence in Cyprus and want to invest in other projects as well, though he declined to give further details.

“The whole investment will reach about one-and-a-half billion euros and instantly have multiple benefits, both with regard to employment on completion of the project and in direct revenue in terms of taxes, direct and indirect,” he said. “At this stage it may be around €40 million but by project completion it may reach €400m.” Aristodemou said the investment is extremely important to Cyprus because it sends a message abroad that the country can still attract foreign investments despite the financial crisis.

For his part, Charles Zhang said the company sees great potential in Cyprus: “After we studied Cyprus, we realised that there are very good prospects for investment.” He added that the President gave his full support to the investment, noting that “for the project in which we are investing we are using a local workforce as much as we can.”

The project will include two golf courses, a five-star hotel, two community sports centres, a commercial and leisure component as well as luxury private homes. The sale to the Hong Kong investors comprises all the plots and land, all permits and licenses granted, all related machinery and stock, and all the contracts and other agreements relating to the project's development.

The European Commission has given the green light to state support for a Cyprus-Greece ferry link, opening the way for a tender to launch the service, outgoing deputy shipping minister Natasa Pilides said on Monday.