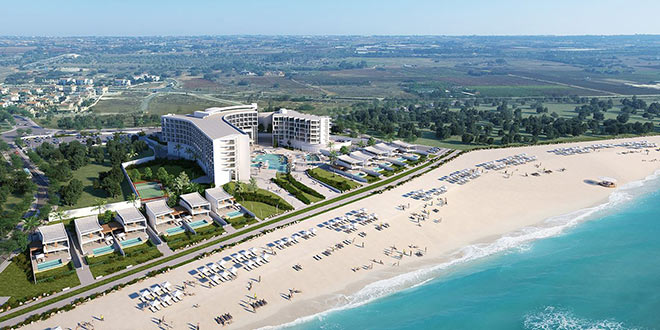 The Sotira Municipality presented its key to the city to the Chinese investors who will be building the village’s first private tourism investment ‘Sun City Spa & Residences’, following the project’s start.

The ceremony took place on December 15, 2016 at the town hall, where Sotira Mayor George Takka, presented the key to the two multi-millionaire Chinese investors of the project – Tommy Chen and Vicki Zheng, and thanked them for selecting Sotira for the €50 million luxury five-star resort hotel; a project that he said will put both Ayia Thekla beach and Sotira on the map.

Sun City will be built in the coastal area of Ayia Thekla, a pristine stretch that has seen its popularity rise – especially for beach weddings since the launch of the municipality’s dedicated civil marriages department.

The luxury project will incorporate a five-star hotel and exclusive beachfront residences, and will complete within two years, built by local construction company Giovani Group. Aside from being the first investment of its kind in Sotira, it is also the second largest in south Famagusta after the pending Ayia Napa marina.

One of the agreements for the project is the hiring of Sotira residents for the job openings the project will create. Other conditions are that the municipality continues running the restaurant on Ayia Thekla beach, and that the coastline is protected.

Chen and Zheng thanked the mayor for the honour and spoke of feeling “already connected” to Sotira, adding that they are ready to offer the community further developments and social contributions.

The awarding of the city’s key followed the official laying of the project’s foundation stone on December 12, with work expected to commence in late January 2017.

The project was then officially presented in Nicosia on December 14 in the presence of Sotira mayor, George Takka; the Chinese Ambassador, The Honourable Huang Xingyuan; President of CIPA (Cyprus Investment Promotion Agency), Christodoulos Angastiniotis; House Speaker, Demetris Syllouris, various political leaders, and businessmen from both Cyprus and China, as well as other countries.

CEO of Giovani Group – Antonis Antoniou – presented an overview of the project and said Sun City “will change the way in which the world sees Famagusta, offering many new jobs and quality accommodation.”

Xingyuan spoke of the efforts to promote the island in the People’s Republic of China, including traditional products such as Halloumi cheese and wine, whilst pledging to bring more Chinese tourists to the island.

Following a post by the Cyprus Sustainable Tourism Initiative (CSTI) on its Facebook page regarding sustainable practises for the project, a clarification was posted seemingly on behalf of Giovani Group.

The CSTI wrote: ‘The Sun City Spa & Residences project in Sotira seems, at first glance, to be much needed by Cyprus. However, in the promotional video there is absolutely no mention of anything related to sustainability.

“The authorities should insist that the very latest technology should be used in constructing and equipping this resort so that it can be held up as being a pioneering project that becomes a world leader in sustainable tourism. Luxury on its own is no longer enough for the discerning traveller – it must be accompanied by all things ‘environmentally friendly’.”

Apparently commenting on behalf of Giovani Group, Antonis G. Antoniou, posted a clarification on the project from his personal Facebook account:

“Another ridiculous post in the name of publicity. . .  the sad story is that some naive people are not only likingthe post but also sharing it. A truly miserable story.

“Sun City will be built with the latest and up-to-date energy efficiency materials, including solar panels for all the residential units, with an additional geothermal energy unit.”

The CSTI thanked Antoniou for his clarification, saying that it was pleased to hear that the project would be built sustainably, and noted that as there was no mention in any publicity material about sustainable practises, it would be good for the company to include this.

Antonis further commented that all the information and specifications would be listed in the final brochure for the project.

The rise of Sotira

Sotira community became a municipality in 2012 and has since done much to promote a unique identity that separates it from the other resorts of south Famagusta, in particular, weddings on its Ayia Thekla beach, and official recognition of its ‘kolokasi’ vegetable (taro root), and its dishes.