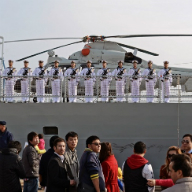 A Chinese frigate which will help escort Syria’s stockpile of chemical weapons out of the country docks in Cyprus as part of a delayed international mission.

The Yancheng, a missile frigate, will accompany a Norwegian-Danish convoy which is in international waters off Syria, waiting for the go-ahead from international watchdogs overseeing the removal of the chemical arsenal. The mission to ship chemicals from Syria has missed its Dec. 31 target date and Chinese and Cypriot officials said it was unclear exactly when it would begin. “China supports the efforts of the international community to destroy the Syrian chemical weapons … we wish this operation a success,” said Liu Xinsheng, the Chinese ambassador to Cyprus. Photis Photiou, the defence minister of Cyprus, said after meeting Chinese officials that he expected the operation would start “any day now”.

Russia will also be providing escort to the convoy carrying Syria’s chemical weapons, which will be loaded onto two cargo ships and escorted to Italy, where a U.S. ship equipped with toxin neutralising equipment will take over. The U.S. vessel, the Cape Ray, is due to leave the United States for the Mediterranean in the near future.

Dozens of Chinese nationals in Cyprus converged on the quay of Limassol port, about 160 miles (250 kms) west of the Syrian port city of Latakia from where the chemicals will be shipped. Loudspeakers blared Chinese music as Chinese flags were waved by women in traditional yellow and red costumes. The December 31 deadline was missed because of poor weather, logistical delays and the conflict inside Syria, where President Bashar al-Assad’s forces have fought to clear rebels from roads along which the chemicals will be transported.

Syria agreed to abandon its chemical weapons under a deal proposed by Russia and hashed out with the United States, after hundreds of people died in an Aug. 21 sarin gas attack that Western nations blamed on Assad’s government. Syrian authorities deny they used chemical weapons, blaming rebels.

China has repeatedly called for a political resolution. It has also called for a full and impartial investigation by U.N. chemical weapons inspectors.