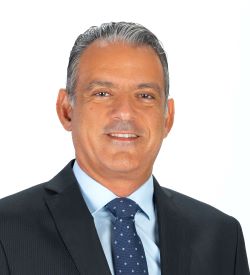 The current cooperative climate between Cyprus and Egypt can be the springboard on which the private sector can expand existing trade relations, there is tremendous growth potential for the mutual benefit of our economies, says Christophoros Anayiotos.

How would you describe the current trade relations between Cyprus and Egypt?

Currently, the trade activity between Cyprus and Egypt can be described as subdued. Based on the official 2021 statistics, Cyprus’ trade with Egypt accounts for less than 1% for both imports and exports of goods. Given the proximity of the two countries and considering the wealth of resources and opportunities, the growth potential of the trade relationship is tremendous. The current economic conditions implicating increased transportation complexities and costs, render the nearness of the two countries an immensely critical competitive advantage to boost the volume of trade.

Delving into the statistics, one can observe that the trade among Cyprus and Egypt, is quite diverse as it covers categories from agriculture, building and other materials, linen and paper to electronic conductors and fire extinguishers. While more sectors can definitely be exploited, the mere breadth of activity can warrant that an increase in its size will surely improve the share of Cypro-Egyptian trade.

What economic sectors in Cyprus have seen significant Egyptian investment and participation, and in what type of projects and activity?

Notably, one of the milestone real estate projects being currently developed in Cyprus is led and fuelled by Egyptian investment. The landmark mixed-used development of Ayia Napa Marina is substantially contributing to enriching the travel and tourism as well as the residential product in one of the most popular destinations of Cyprus. We, as Cyprus, surely welcome and invite more such investments and the government’s responsibility as well as our association’s role is to ensure that we enable and facilitate such initiatives.

What advantages does Cyprus offer specifically to Egyptian companies and investors?

Cyprus poses several advantages that attract international investments the most important of which relate to our status as an EU Member State, the attractive tax regime and the high quality of human resources in many industries.

Specifically relevant to Egypt is, I believe, our EU status which can offer a stepping stone into the European Union in different ways including setting up operational and/or production facilities that would enable them to export services and goods into the EU, seamlessly.

What new prospects and opportunities could be cultivated to facilitate more business between Cyprus and Egypt?

The current cooperative climate and the deliberations at the highest level of the respective governments aiming to improve trade and commercial relationships and the infrastructure between the two countries, can be the springboard on which the private sector can base the growth of the existing trade relations. As mentioned above, the present commercial relationship between the two countries is quite diverse. Hence, the future can offer opportunities in different areas including agriculture and fish farming, pharmaceutical, renewable energy, real estate development and construction and many more.

How does the Cyprus-Egypt Business Association support and foster business links between the two countries?

During March 2022, the Cyprus Chamber of Commerce and Industry with the Ministry of Energy, Commerce, and Industry and the support of the Cyprus-Egypt Business Association organised a Business Delegation and Forum to Cairo, in collaboration with the Federation of Egyptian Chambers of Commerce. The Forum, which was well attended by Egyptian and Cypriot businesspersons and was addressed by the respective Ministers of Trade and Commerce, has facilitated the communication between businesses through presentations and face-to-face meetings. We feel that the ingredients for enhancing Cyprus’ trade relations with this important neighbour are there; we merely have to exploit them for the mutual benefit of our economies.