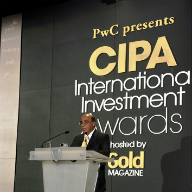 The awards were given during the CIPA International Investment Awards 2013, which took place at the Presidential Palace on 10 September, 2013. The event was under the auspices of the President of the Republic of Cyprus, Mr Nicos Anastasiades. The awards were presented by audit firm PwC and organised by IMH, Gold magazine and CIPA. The some 500 guests included state officials, businesspeople, foreign investors and professionals in the services sector.

Speaking at the event, President Anastasiades stressed that the government was fully focused on promoting growth, offering favourable tax incentives to existing or new businesses active in Cyprus, encouraging foreign investment, increasing Cyprus’ competitiveness and creating an efficient and business-friendly environment. Mr Anastasiades expressed the government’s appreciation of the “tireless efforts and hard work by CIPA in its effort to contribute to the recovery of the Cyprus economy, restoration of trust in the economy and its promotion as an extremely attractive destination for foreign investors”. He added, “It is for exactly these reasons, and with a view of improving the already close and mutually beneficial relationship being developed between the Government and CIPA, that it has been decided that a further one and a half million Euros (€1.5 million) will be allocated to CIPA”.

CIPA Chairman Christodoulos Angastiniotis said he was convinced Cyprus would achieve a reversal of the current situation in record time. At the same time, he hailed the government’s efforts to attract foreign investment and create a favourable business climate, so as to lay the foundations for restarting the economy. Mr Angastiniotis said even more emphasis needed to be paid to attracting foreign investment, as it opens opportunities for immediate actions, capable not only of curbing the effects of the crisis, but also creating the conditions for economic recovery.

“With the knowledge and the networks it has amassed over the past years, CIPA is prepared to take on the role of central coordinator for all actions aimed at attracting and promoting investments, in close cooperation with the private bodies and government,” said the chairman of CIPA. He added that Cyprus had opportunities for growth across many other sectors, such as: energy, tourism, shipping, large-scale development projects, the audio-visual industry, research and innovation, professional services and others.

PwC, Barclays and TFI Markets sponsored the event. The ten award winners of the CIPA International Investment Awards 2013 are:

• Wargaming Public Company Limited
The award was given to Viktor Kislyi, President and CEO, by Demetra Kalogirou, Chairwoman of the Cyprus Securities and Exchange Commission (CSE), and Loukas Marangos, CEO of TFI Markets.

• MTN Cyprus
The award was given to Philip van Dalsen, CEO, By Harris Georgiades, Minister of Finance, and Evgenios Evgeniou, CEO of PwC.

• ExxonMobil Cyprus Ltd.
The award was given to Varnavas Theodosiou, President and Managing Director, by Fotis Fotiou, Minister of Defence, and Hans Wolff, Director & Country Manager of Βarclays.

• Unicom Management Services (Cyprus) Ltd
The award was given to Sergey Popravko, Managing Director, by Christodoulos Angastiniotis, Chairman of CIPA, and Zeta Emilianidou, Minister of Labour and Social Insurance.

• Barclays
Η Barclays received one of the honourary awards: the award was given to Hans Wolff, Director & Country Manager, by President of the Republic Nicos Anastasiades.

• Georgios Vassiliou
Georgios Vassiliou received the second honourary award for his overall contribution to the sector of professional services and his contribution to establishing Cyprus as an invesetment centre. The award was handed over by Sir Stelios Hadjioannou and Michalakis Zambelas, who had received the same award in one of the earlier-held CIPA International Investment Awards.