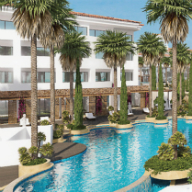 Claridge’s decision is subject to approval by an extraordinary shareholder meeting on February 2, 2015, the company said today in a statement on the website of the Cyprus Stock Exchange.

The amount will be fully paid in cash, the statement said.

The decision to sell the assets to Olympic Lagoon, which is owned to 52% by Kanika Hotels Limited and to 48% by Amathus Public Limited, had to do with the company’s failure to reach a restructuring agreement with its creditors, the lack of funds to have the hotel in Paphos renovated and turned in to an Olympic Lagoon Resort, lack of sufficient liquidity to cover the company’s obligations and the significant loss of issued share capital, Limassol-based Claridge said.

The company has a total of €32.3 million in outstanding loans with more than €2 million in arrears, while overall €23.5 million in debt matures on December 31, this year, Claridge said.