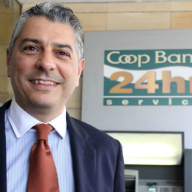 The Co-operative Central Bank (CCB) recently announced €196 million in pre-provision profits for 2013, €15 million in net profit for the first quarter in 2014 and a core-tier 1 capital ratio of 12.1%.

In a written statement, the CCB announced the preliminary results, presented for the first time in consolidated format. These include provisions for €2.6 billion, covering total non-performing loans by 42%.

A big chunk of these, totalling €1.9 billion, were new provisions marked up in 2013 in accordance with the terms of the restructuring plan imposed as part of the co-ops bailout with €1.5 billion of government funds, and should have been marked up in previous years.

Total equity after loan provisions was €1.2 billion, with a healthy 12.1% core-tier 1 capital. The five-year restructuring plan already implemented by the CCB includes a programme to rein in expenditure, expected to incur totalsavings of €300 million.

The CCB noted that the Co-ops are not dependent on emergency Central Bank funding (ELA) and have sufficient liquidity.

“These results are particularly gratifying, considering they were achieved under difficult circumstances for the Cypriot financial system, while the first quarter results for 2014 suggest the co-ops’ important prospects,” the statement read.

In contrast to undercapitalised commercial banks that were recapitalised by converting uninsured deposits into equity, the Co-ops were nationalised and bailed out by the government via a €1.5 billion capital injection.

In return, the network of 93 co-ops was consolidated to 18 new entities, operations were overhauled radically and the Central Bank of Cyprus took over interim regulation and oversight until it is taken over by the European Central Bank (ECB) in November.

Speaking at a news conference, CCB chairman Nikolas Hadjiyiannis spoke of an “operational milestone” and pledged to continue the “tough and multi-faceted effort”.

“Today is an operational milestone for the Co-ops as we prepared consolidated accounts in accordance with strict ECB guidelines,” he said.

“Encouraged by the positive results recorded in 2014, we continue our tough and multi-faceted effort. This is only the beginning and we know full well that the road ahead is difficult, but in light of everything that has happened in the first seven months, our patience and perseverance remain unwavering.”

“In conclusion, we can say that the Co-ops have turned a page,” Hadjiyiannis said.