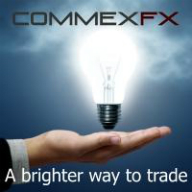 Cyprus-based CommexFX, launches its version of Dukascopy Bank's JForex platform in Jordan, which was attended by many retail brokerages with a client base in the Middle East, including FXCM, CitiFX, ADS Securities, Merex, ICM Capital, Merex and Noor.

CommexFX’s Diana Munoz spoke with LeapRate last week in a television interview, detailing the firm’s business model, an interview during which Ms. Munoz explained that Cyprus is an ideal location from which to gain a client base from not just Europe, but also Asian markets.

The company added the JForex platform, citing technological advancement and the security of operating with a Swiss bank as being key factors in the decision.

Jean El Khoury, Head of Marketing at CommexFX explained to LeapRate that “Any expo presents the ideal opportunity to meet our valued traders and clients face-to-face, but at this particular expo we also had the chance of sharing the experience with Dukascopy as we add their platform, the JForex to our list of prestigious trading platforms,which includes our popular MT4.”

“We are convinced that since we share the same goals for offering clients superior FX products and technical solutions, the partnership between Dukascopy and CommexFX will flourish and prosper benefitting both parties.”

Speaking from the event today, Luis Sanchez, First Vice President of Dukascopy Bank reported to LeapRate that “Just to give an example of the kind of professional relationships we have with our White Label partners, not only do we partner with them but we also accompany them to expos, share the stage and help them promote the JForex platform, along with their other platforms. We support them all the way, and I am pleased to announce that this new concept is put into practice today at the 9th Jordan Expo in collaboration with CommexFX, who are the Platinum Sponsor.”

Technological innovation has been a subject of importance more so than ever this year, as detailed by LeapRate’s interview with Dukascopy TV in Geneva last week, during which the forthcoming Forex Innovators conference in Tel Aviv, Israel was discussed, along with the rationale behind it.

The business-to-business conference will be launched shortly, and will be presented by LeapRate to an international audience encompassing the world’s most prominent innovators in the Forex industry.