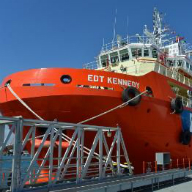 New vessel 'EDT Kennedy' of the EDT Offshore group is christened at a ceremony in Limassol, during which Minister of Communications and Works said the ports were vital to the economy and should be protected.

Minister of Communications and Works Tasos Mitsopoulos noted that the ceremony promoted the importance of Limassol Port as a commercial port and as a port of registration of ships, welcomed the registration of high specification newly-constructed vessels and ships, which are modern, safe and environmentally friendly. The Minister pointed out that the christening ceremony constituted an expression of confidence in Cyprus' shipping, which was a dynamic and promising sector of the economy. He furthermore expressed hope that the decision of EDT Offshore to hold the ceremony in Limassol would act as an example for other christening ceremonies at Cypriot ports.

Addressing the event, Chairman of the Cyprus Ports Authority Alecos Michaelides assured that the Authority would continue to support companies so that the ports of Cyprus and the country in general become established as regional service centres for hydrocarbon-related activities in the Eastern Mediterranean. EDT Kennedy will provide support services to hydrocarbon exploration and extraction activities in Cyprus' exclusive economic zone and the broader region of the Southeastern Mediterranean. The vessel was christened by the wives of the Minister of Communications and the Ports Authority Chairman.