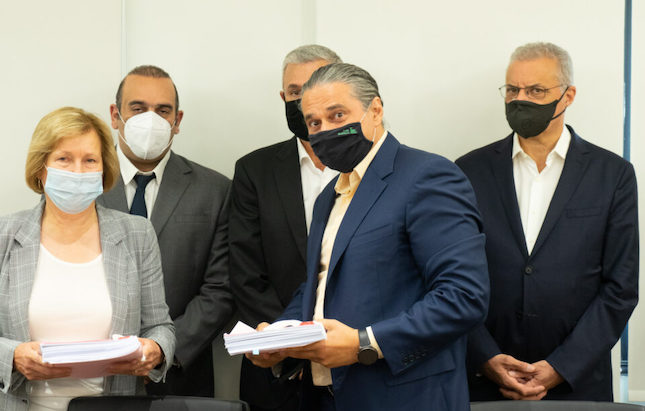 The contract governing the design and construction for the land registry’s new headquarters in Nicosia was signed on Monday at the ministry of transport.

The project concerns the design, construction and 12-year maintenance of a reinforced concrete building with a minimum total area of 12620 square metres, to be constructed in Aglandjia municipality at the corner of Kyrenias and Glafcos Clerides avenues, with work expected to begin in the coming September and be completed within 36 months. The project will cost €22,294,747 including VAT.

Transport minister Yiannis Karousos stressed the project’s significance as the state was paying up to €700 thousand per year in rental fees for housing the registry.

Karousos also expressed certainty that the project will be completed within the specified timeframe and congratulated Interior Minister Nicos Nouris for his ministry’s cooperation, as both ministries promoted and executed projects in excess of €1.2 billion.

Nouris, for his part, expressed his satisfaction over the government’s direction in housing governmental services to avoid burdening the state budget.

Signatories to the contract were, on behalf of the government, department of public works deputy director Eleni Kaskiri and on behalf of the construction company Lois Builders Ltd & Wade Adams Contracting Cyprus Ltd, Michalis Lois.