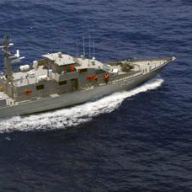 Cyprus signs a contract with Israel for the purchase of two patrol boats to boost the island’s coastal defence capabilities.

Speaking to the media, Minister of Defence Fotis Fotiou confirmed the deal foresees the delivery of two Offshore Patrol Vessels (OPV) to promote stability in Cyprus waters. “The presence of these vessels in Cyprus’ exclusive economic zone will raise our levels of security and defence capabilities,” said the minister.

Patrol boats are relatively small naval vessels commonly used in various border protection roles including anti-smuggling, anti-piracy, fisheries patrols and immigration law enforcement. The cost of the vessels, which are manufactured by Israel Shipyards Ltd, amounts to €100 million each and includes a variety of specialised equipment and the training which National Guard personnel are scheduled to receive. Although the deal has been signed the funds for the purchase of the patrol boats still needs to be approved by parliament. The boats are expected to be delivered to Cyprus within 18 months.