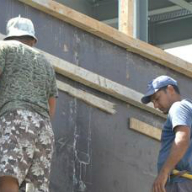 The Federation of Associations of Building Contractors Cyprus (OSEOK) has issued a desperate plea for support to the President, saying local contactors were 'pinning their last hopes' on his intervention.

“A long-term lifeline for the economy of Cyprus, the construction sector has long contributed to the Gross National Product at around 7% and made a significant contribution to employment, at around 10%, but is now at the stage of complete deterioration,” a letter to the President by OSEOK President Costas Roushias says. He continued that “the construction sector has beenabandoned to the mercy of the times while the lack of cash flow and the rapidly destructive developments in the fiscal system continue to prevent us from going ahead with pre-announced measures to restart the economy. A precondition of this is the restart of its strongest contributor, the construction sector.”

Roushias called on Anastasiades to take four courses of action including providing government-backed guarantees for construction companies to take on projects overseas, something OSEOK said had been done in 1974. The federation also called for the banks to return to their usual operation “so that taking on self-financed projects could become possible again.” OSEOK also suggested the creation of a 'guarantee mechanism' and for new projects either using any remaining tourism industry funds for the construction sector or by going ahead with making government-owned buildings more energy efficient.

The federation noted that the dramatically shrinking construction sector had led to many seeking work overseas where they also encountered difficulties. “The largest percentage of contractors have either given up the profession or are seeking work overseas” Roushias said, particularly because of banking restrictions. He continued that only a small number remained active with some operating at a loss “hoping for even an 11th hour rescue of the sector by the state.”