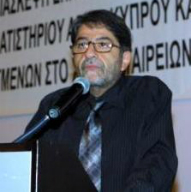 Marios Clerides, a well respected banker and economist and former chairman of the Cyprus Securities and Exchange Commission has been appointed the new chief executive officer of the recently nationalised Cooperative Central Bank.

The island’s Cooperative banks are now by 99%-owned by the state following a €1.5 bln euro capital injection as part of the €10 bln bailout for Cyprus agreed with the Troika of international lenders (EC, ECB and the IMF).Clerides, 60, until now Group Senior General Manager, Risk Management & Strategy of the Hellenic Bank, joined the island’s second biggest lender 31 years ago in charge of planning and economic research. He was involved in various projects such as the introduction of ATMs in the bank, feasibility studies for the establishment of group subsidiary companies as well as in capital and bond issues of the bank.

In July 2001, he left Hellenic Bank to become chairman of the Securities and Exchange Commission (CySEC) on a five-year contract and returned to the bank as Group General Manager, Risk Management. Thereafter he also assumed responsibility for Group Strategic Development, Economic Studies and Corporate Governance & Compliance. At the same time he teaches part-time at the University of Cyprus where he serves on the council for the Centre for Economic Research and is Chairman of the Cyprus Banking Association. In April, he was appointed to the National Council for the Economy, headed by economics Nobel laureate Dr Christoforos Pissarides that advises the President of Cyprus on economy issues and future policy. Marios Clerides studied Economics (B.Sc. / M.Sc.) at the London School of Economics and in 1982 he was awarded the Doctorate of Philosophy from the same University (Ph.D. in Labour Economics).