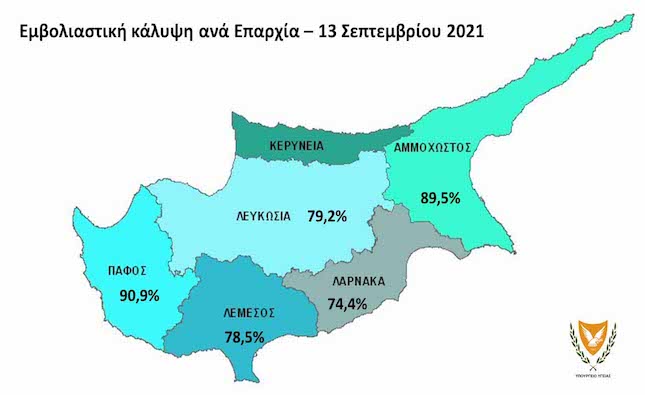 A total of 80% of the adult population had received at least the first dose of a Covid vaccine, the health ministry said on Tuesday.

Data showed that 80% of adults had received the first dose while 76% completed their vaccination.

Meanwhile, about three months after the extension of the national vaccination scheme to those under 18, some 39.6% of 16 and 17-year-olds have received at least one dose, while another 32.5% were fully vaccinated.

For children aged 12 to 15, the vaccination percentage stands at 24.1% with the first dose between August 2 and September 13.

Vaccination coverage rose across all age groups since the last report on September 11.

By district, Larnaca has the lowest vaccination coverage with 74.4% of its eligible population having received at least one dose, while Paphos maintains first place with 90.9 %.

The second highest vaccination percentage is in Famagusta with 89.5%, followed by Nicosia and Limassol with 79.2 and 78.5% respectively.

Meanwhile, the country has already carried out 1,421 administer booster mRNA shots to the elderly and vulnerable groups.