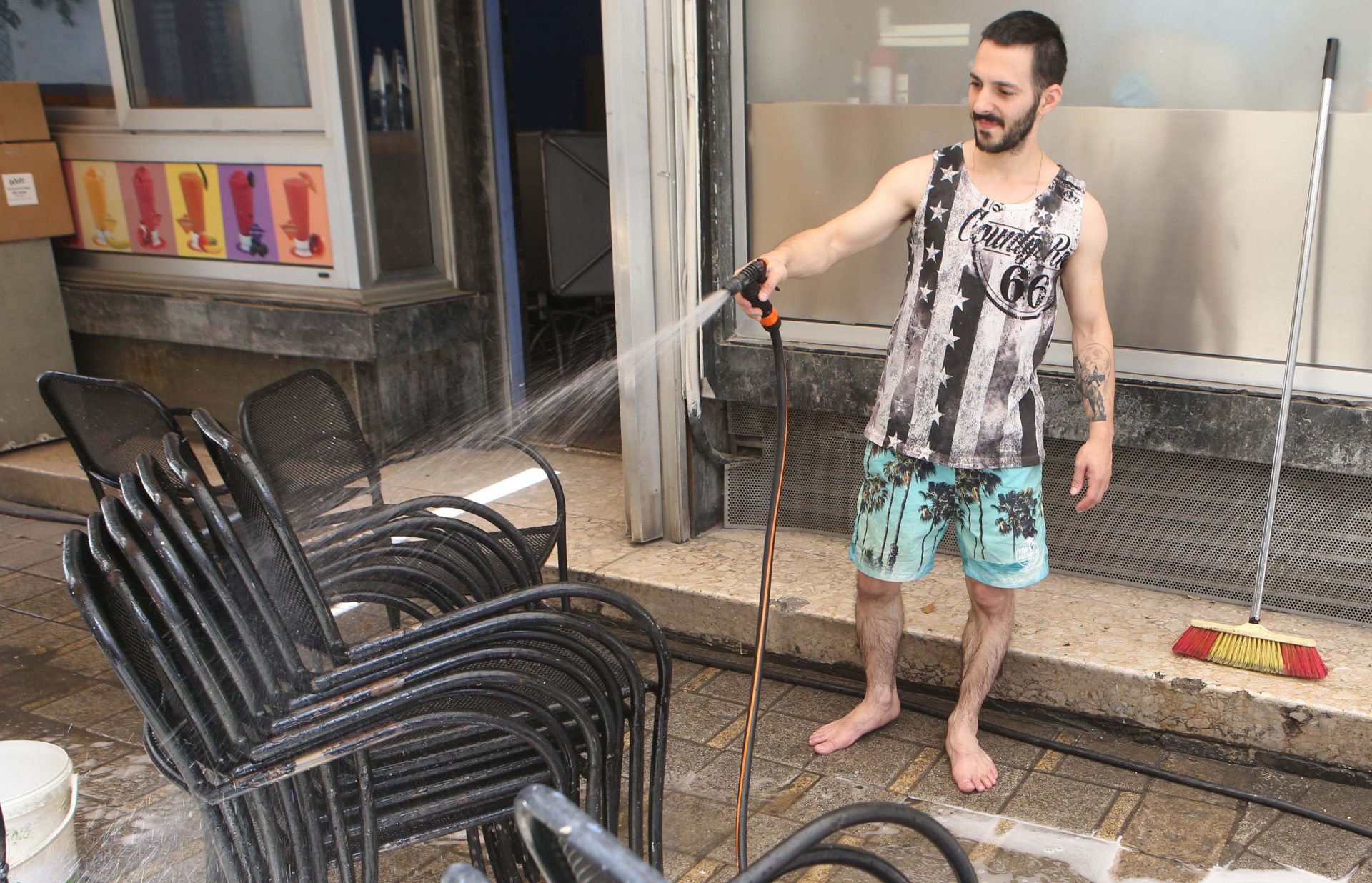 After two months of lockdown, curfews and SMS permits to go outside for any reason, Cyprus returns to a sort of normality on Thursday, barring the opening of airports and crossings.

A decision on the airports is expected to be announced on Friday with CyBC reporting last night they could be reopened on June 9 with visitors from Israel and Greece set to be the first to get the green light.

From Thursday all movement restrictions are being lifted and hairdressers, beauticians and the outside spaces of restaurants and pubs can reopen, as can parks and playgrounds, and people can have visitors to their homes visit others at their homes in groups of up to 10.

Wednesday saw staff busy at cafes, disinfecting chairs and tables in places that had been closed down since March, while beaches were also being prepared for reopening on Saturday.

Hours before the new freedoms kicked in, the health ministry announced four new cases of Covid-19 – bringing the total number to 922.

“Tomorrow we enter the second phase of the relaxation of measures. We consider it a milestone in the effort for a full return normalcy and for this reason we plead with you to continue with the same decisiveness so that it is not necessary to take steps backwards,” Kostrikis said.

The steady downward trend which has been broadcast to the nation at its daily briefings has been a great source of encouragement and Kostrikis reiterated the scientific committee’s cautious optimism.

“The results which we are announcing today are in line with the epidemiological course which has been established in recent weeks, and as we have said, is very satisfactory,” said Dr Leontios Kostrikis.

While politicians and experts have dominated the media, Thursday is the day for the ordinary people.  As the virus’ grip has thawed, society is eagerly – and yet cautiously – about to emerge from a two and half month hibernation.

“What I missed the most was just going downtown for a coffee, so that’s the first thing I’m going to do,” said Anna Hewitt, 52, a resident of Nicosia.

“And since ‘liberation day’ falls exactly on the same day as one of my friend’s birthday, I’m going to enjoy my coffee and my walk with her. I have been looking forward to it and, after being forced into lockdown for the past weeks, I’m going to enjoy it even more.”

Hairdressers and barbers also seem to be a popular first destination for most people after the easing of measures – as people seek to shed their winter coat in the unseasonably hot weather.

“I have been in need of a haircut and a beard trim for a long time, even before the lockdown started, so I’m really happy to be able to finally pay a visit to my barber,” Nikolas Andreou, 29, told Cyprus Mail.

“Once done, I will probably meet some friends with a fresh new look and have a beer altogether.”

For those seeking to bend the rules, whisperings of a midnight rendezvous last night when Cyprus was still technically under curfew after 10pm echoed on social media. While following the letter of the law – restrictions on movement ended at midnight on Thursday – they are not quite following the spirit of the law.

Most schools will also see children returning to classes on Thursday with Covid-19 tests continuing on students and teachers, but kindergartens are to remain closed.

The green light for the second phase of reopening was given by the scientific team last week as confirmed cases of coronavirus have remained in single digits this month.

Each reopening will however be accompanied by hygiene and social distancing protocols for businesses and new penalties for those businesses who violate them, the government made clear this week. The same measures will be applied to churches, which can also reopen on Saturday.

With libraries, museums, archaeological and historical sites, and ports except for the disembarkation of passengers from cruise ships, opening up on June 1, all that remains will be airports and the crossing points between the two sides.

From opening time until 10am, pharmacies and supermarkets must continue to serve only people who belong to vulnerable groups, people over 60 and people with disabilities. The cabinet will decide on Friday on the action plan for reopening of airports and hotels, deputy government spokesman Panayiotis Sentonas said on Wednesday.

President Nicos Anastasiades met with members of the health ministry’s epidemiological team on Wednesday at the presidential palace to discuss the next steps but the meeting’s main topic was the reopening of the Larnaca and Paphos airports, a key factor for the country economically, especially in regards to the return of tourists.

The meeting was attended by the ministers of transport, health, finance, labour, justice and foreign affairs, with the deputy minister for tourism.

After the meeting, Sentonas said the ministers had primarily focused on the government’s action plan for the gradual lifting of restrictive measures for flights and the reopening of airports.

Particular emphasis was also placed on the upcoming reopening of the hotels. On Monday, tourism minister Savvas Perdios said that the number of hotels that will open in the summer will depend on the information gathered by the end of May and on the protocols that will be issued by the health ministry.

The president heard the epidemiological team’s opinion on several issues concerning the action plan, including the grouping of countries, the criteria for each category of passenger landing in Cyprus and the eventual safety measures to be adopted.

“A final decision on the action plan for the reopening of the airports and of the hotels will be taken by the Council of Ministers on Friday,” Senontas said after the meeting.