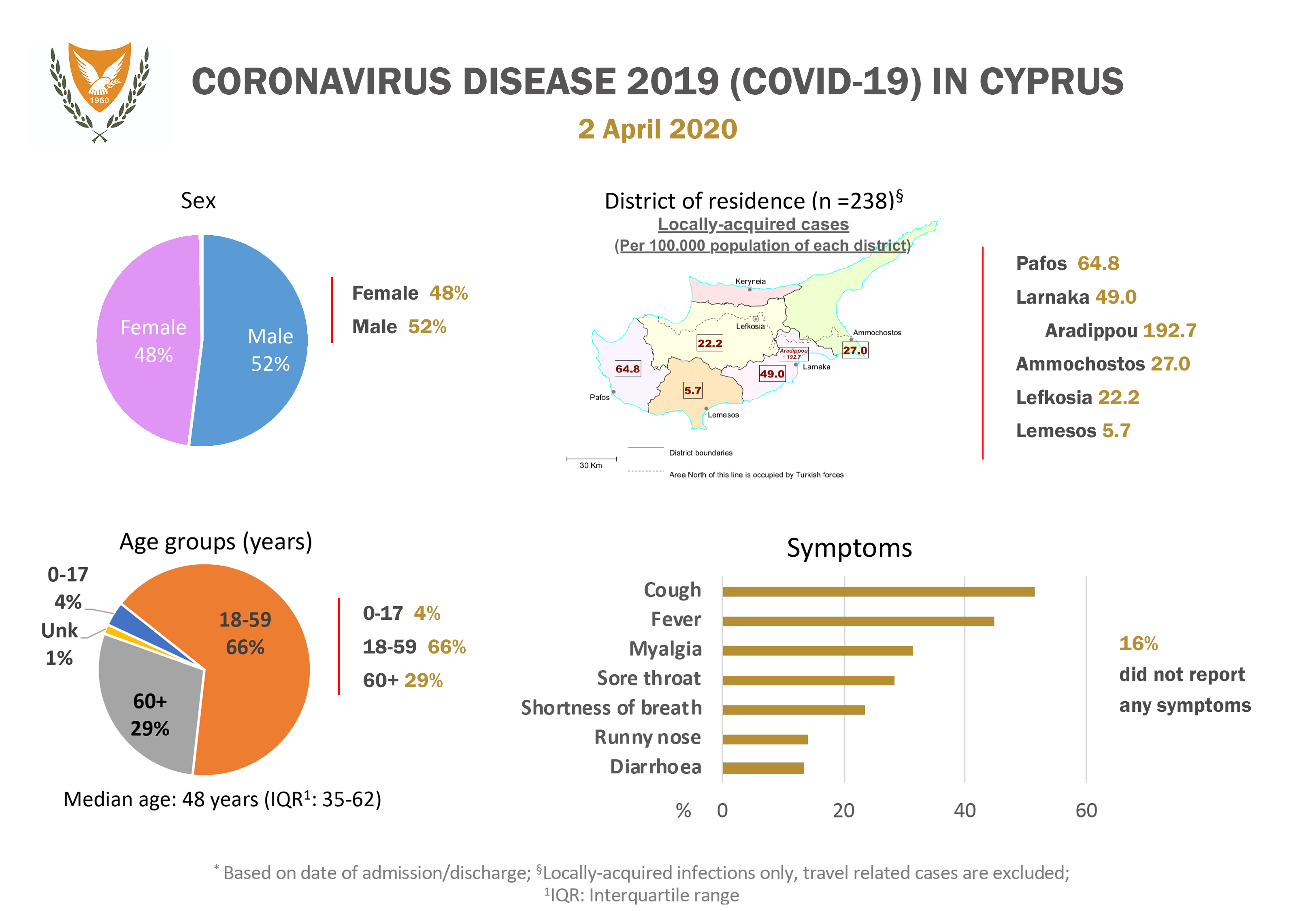 Strict COVID-19 social distancing rules seem to be working after Cyprus saw a 33% dip in confirmed daily cases on Sunday falling to 20 from 30 with total deaths attributed to the virus remaining at nine.

Moreover, 20 new confirmed COVID-19 cases – from 30 on Sunday – were announced, bringing the total number to 446, including 10 in the British Bases.

According to health authorities, the death of a 76-year-old man infected with COVID-19 died as a result of other serious health problems. The total number of people who died in Cyprus after testing positive since the pandemic broke out, is 14, nine of which were directly caused by COVID-19.

The nine dead, seven men and two women had an average age of 66.

The new cases were confirmed after 792 tests were conducted.

Eighteen of the cases were traced among the contacts of people who have already contracted COVID-19. The medical record of the other two is under investigation.

Ministry of Health adviser Dr Leontios Kostrikis said with regard to 21 people whose medical history was under investigation, 17 of them were found to be connected with a confirmed case while for the other four the investigation continues.

Some 446 COVID-19 cases were confirmed after 10,946 tests were carried out by the Cyprus Neurology and Genetics Institute, the Microbiological Department of the Cyprus State Health Services Organisation hospitals and private labs.

Out of the 446 cases 317 people were infected through contacts in Cyprus.

A total of 37 people who tested positive to the virus and were admitted to the hospital have recovered.

Referring to the tests carried out by the NIPD Genetics private lab in virus hotspots Paphos and Aradippou, Kostrikis said that they had one more confirmed case in Aradippou after 178 tests were carried out, while as for Paphos, there are no results to be announced yet.

Kostrikis said that the method of tracing the contacts of confirmed cases is considered very effective worldwide and that due to the small number of Cyprus’ population this method is even more effective here.

However, epidemiologists are not informed properly during the process of tracing contacts as some people avoid giving details.

He warned that by doing so people do not protect their friends or their beloved ones whom they might have infected and called on them to give all necessary information.

Since a record number of confirmed cases (58 cases) on April 1, the number of cases has declined each day.

Kostrikis said that it would be premature for scientists to say that this is a sign that contamination of the virus is slowing down.

However, he expressed optimism about the effectiveness of the restrictive measures being implemented.

Four of them are receiving treatment in the Intensive Care Unit, while four people were discharged from the hospital.

Eleven people are now ventilators, their condition is currently stable but critical.

Loizou said that according to the epidemiological analysis 5% of the cases in Cyprus have been hospitalized so far, while 2% of those infected have died.

Loizou said that these numbers are lower than the average numbers worldwide and stressed that the effort is to improve the situation further.