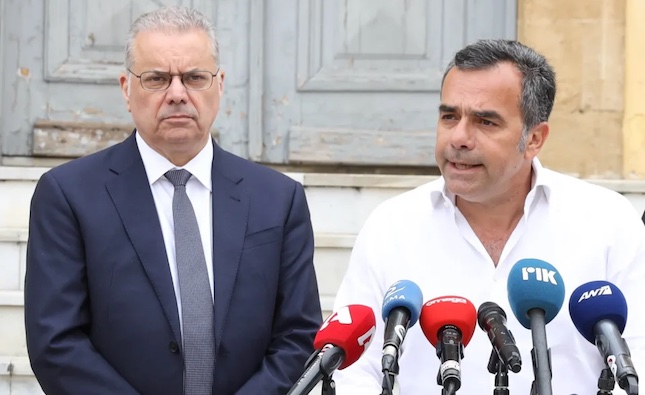 Incentives for the creation of student residences within walled city of Nicosia is another step towards the permanent revitalisation of the area, Interior Minister Nicos Nouris said on Monday.

Speaking at the official call for applications for the incentives scheme at Phaneromini square, Nouris said “today is an important day” as it brings to life a decades-old vision.

“The holistic intervention of the state in the walled city of Nicosia is finally becoming a reality,” he said during the launch which took place in the presence of relevant institutions, the finance minister Constantinos Petrides and Nicosia Mayor Constantinos Yorkadjis.

Under the newly-approved scheme, planning and other incentives will be provided to create student residences in the area and accelerate the procedures for the development of the walled city.

Part of the plan is the purchase of two properties, one on Aristeidou Street and a building complex at the junction of Voulgaroktonou-Arsinois-Komninou Streets, to transform them into student residences, with funding secured by the municipality under the Recovery and Resilience Plan, amounting to €6.9 million.

This comes after the renovation of the Phaneromeni school and the transfer of the School of Architecture of the University of Cyprus.

In his own address at the launch, the mayor highlighted the importance of the new incentives saying this will “attract students to the walled city”, echoing the corresponding announcement by the municipality.

Saying “never before has so much been done in the walled city,” Yiorkadjis noted that “there is much more to be done”.

According to the interior minister, the plan also includes a series of other actions, which are already in motion and will be implemented in the coming weeks.

He added that these are part of other measures including a €40 million action plan aimed at revamping Nicosia’s walled city that was presented in mid-April, which, among others, will provide grants for businesses to enhance entrepreneurship in the old city. The state will also provide incentives for young families to move into the area as part of a broader government plan worth €116 million.

Furthermore, the minister said an “extremely generous scheme” of urban planning and financial incentives, which will also be implemented as of next month will be available to those who choose to invest in the walled city of Nicosia, with the possibility of either financing or utilising their properties. Nouris added that it was decided to declare as listed about 500 remarkable buildings that are in the walled city of Nicosia so their owners get their rights and the incentives they are entitled to.

These are part of a series of measures and interventions that have been implemented and will continue to be implemented to attract young people to come and live or work in the historic centre of Nicosia, the municipality said in a written statement.

Among other interventions are the creation of the Severis Foundation and the Hambis Museum, the financial incentives recently given to attract businesses, the operation of the research centre in cooperation with the three state universities of Cyprus as well as the projects in Eleftherias Square, Kostakis Pantelidis and Omirou Avenue.

The Nicosia municipality added it hopes that they will attract other entrepreneurs who will see the potential and make investments that will enhance the dynamics of the walled city.

“We will continue to vigorously pursue the effort to support and revitalise the historic centre of Nicosia, the geographical and administrative centre of the Republic of Cyprus,” the announcement added.