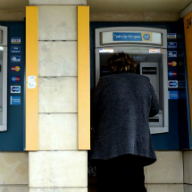 Credit card expenditure for March spiked 18% in the use of local plastic for purchases in Cyprus.

There was as well a steep 34% drop in the use of local cards abroad compared to the same month in 2013, as recorded by clearing agency JCC. In March 2013 Cyprus agreed rescue aid with international lenders, leaving the island shell-shocked as banks closed their doors.

President Anastasiades described it as a 'state of emergency' as most sales and service providers on the island ran their businesses on a cash only basis. The 18% increase in the use of local cards at home for the month of March translates into a total of €167 million spent and shows an upward momentum in multiple sectors.

Cumulative spending figures for the first three months of 2014 show a 6% increase in the use of cards at home with approximately €560 million having been spent on the island.

But, figures regarding the use of foreign cards in Cyprus showed an impressive 17% increase last month, coming hand-in-hand with a 21% increase in the number of transactions, dropping the average value of transaction to €98, down from €99 last year.

The use of foreign cards on the island for purchases totalled €32.42 million for March and an estimated €84.5m since the beginning of the year.