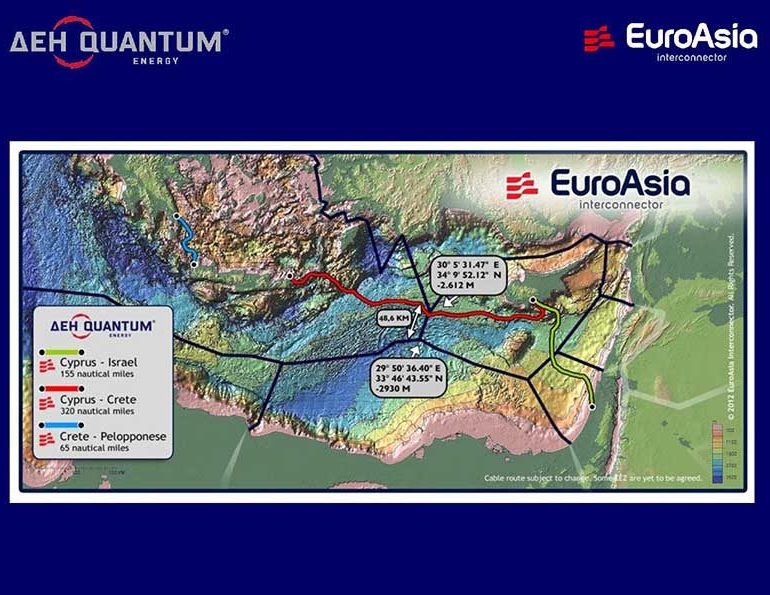 The Crete-Attica interconnection project, a section of the subsea electricity link that was taken away from the Cyprus developer and handed to a Chinese-controlled entity, has already fallen behind schedule.

Manos Manousakis, chairman of the Greek transmission system operator, ADMIE, in which China’s State Grid Corp has a 24% stake, told the Athens Investment Forum “the biggest infrastructure project in the country at the moment is the Crete-Attica interconnection, which, after the recent decisions of the government, is proceeding without any clouds on the horizon and without any delays.”

Together with the smaller Peloponisos-Crete link that will be delivered sooner, Manousakis said that “by early 2023, Crete will be electrified exclusively from the continental system.”

This is in stark contrast to the EuroAsia Interconnector system that was scheduled to implement the Crete-Attica cable by the summer of 2022 as part of the Israel-Cyprus-Greece project.

On October 4, Greek Minister for the Environment and Energy Kostis Hatzidakis justified his decision to take the Crete-Attica section away from EuroAsia and give it to ADMIE, saying that time was of the essence for Crete, where outdated and high-emission diesel-fueled power stations have to be decommissioned.

News site energypress.gr said “already it is estimated that the engagement with EuroAsia has created delays and any new postponement [of the tenders process] would endanger the project’s timeframe, which in any case seems to be pushed further back ‘a little’.

“Addressing a conference a few days ago, ADMIE Chairman Manos Manousakis referred to the beginning of 2023 and not the end of 2022 as the start of operations of the Crete-Attica cable,” the news site wrote.

The EuroAsia Interconnector, supported by all successive Greek governments since it was conceived in 2012, is considered by the European Commission as a ‘project of common interest’ (PCI), which makes it eligible for large-scale grants from the ‘Connecting Europe Facility’ and favourable borrowing from the EU’s financing arm, the European Investment Bank and other institutions.

While removing the Crete-Attica cable from the EuroAsia Interconnector’s system, minister Hatzidakis co-signed with his Cypriot counterpart the PCI endorsement for the other two sections of the initial project, the Cyprus-Crete and Cyprus-Israel links.

The Crete-Attica interconnection has been demoted to a ‘national’ project and is not eligible to receive any EU funding, further burdening Greek consumers and taxpayers.

In its efforts to keep the entire system intact, EuroAsia has insisted on the interoperability of the entire subsea cable and the four converter stations in Hadera, Israel, Kofinou, Cyprus, Korakia, Crete, and Attica in mainland Greece, to ensure the free-flow of 1,000MW of electricity in the first phase of the project.

Observers in Brussels have serious doubts about the interoperability of the HVDC converter stations in Crete and Attica with the rest of the interconnector, which is why the Commission, albeit upset by the Greek government’s U-turn, wants a technical committee in place to oversee the specifications and ensure universality throughout the system, to be built by EuroAsia and partly by ADMIE.