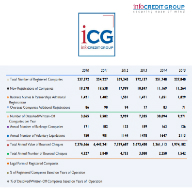 The impact of the 2013 financial crisis on Cyprus' companies, as well as on the economy in general, has been marked by a rapid fall in the rate of bounced cheques and the rise in liquidations, all benchmarks of a contracting economy, according to an analysis commissioned by the Infocredit Group.

The study demonstrates how the mentalities and tactics of companies have changed over the past six years. This is evident from the significant decrease in the Number of Bounced Cheques (down to 1,542 in 2015 from 4,753 in 2012), as well as from the rise in the Number of Voluntary Liquidations, which show a gradual increase over the last six years, reaching a peak in 2015.

It is worth noting that the drop in the Value and Number of Bounced Cheques is likely to be attributable to uncertainty and market reluctance to accepting cheques as a means of payment (ref: Infocredit Group analysis).

2014 was the peak year with regard to the Number of Dissolved/Written-off Companies and during the first two months of 2016, 7,196 companies have already been dissolved/written-off. In addition, 2015 marked the highest Number of Voluntary Liquidations over this six year period.

Download Infocredit Group’s free infographic here, and explore the changes that occurred with respect to Cypriot companies during the last six years.