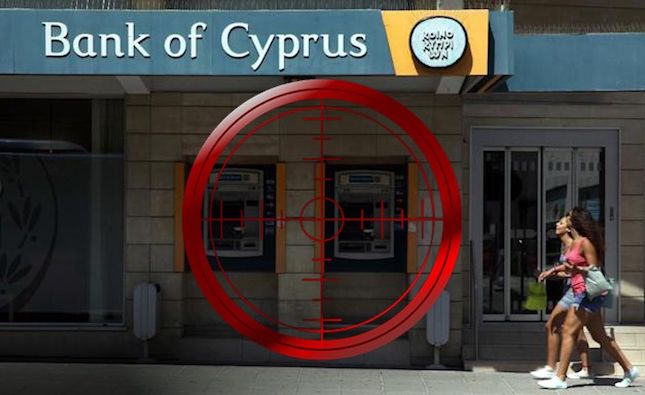 Private equity firm Lone Star has until Friday to submit a binding offer to buy the Bank of Cyprus, but the island’s largest financial institution could be out of reach as the House is expected one day earlier to vote on a bill that would authorize the government to block a hostile takeover on security grounds.

The House finance committee in the Republic of Cyprus is putting an emergency bill to a vote on Thursday that could authorize the finance minister to block a takeover of the country’s biggest bank with a potential offer by Lone Star, which has until Friday to make an official offer.

According to local media, the House finance committee met on Monday to discuss an emergency government bill that would introduce safety provisions, essentially providing strict criteria and offering tools to the finance minister to step in and block the sale on national security grounds or public order concerns.

Last month Bloomberg broke the news that the board of the Bank of Cyprus Holdings Plc had quietly rejected three unofficial offers by the fund from Texas. The news going public essentially triggered a specific procedure that included a deadline on Friday at 5pm, by which Lone Star can still make a formal offer.

In early May the Dallas-headquartered fund initially offered €1.25 per BoC share, then 20 days later upped the offer to €1.38, and in early July Lone Star raised the price to €1.51.

But the €727 million offer was still rejected by the bank’s executive board, which said the proposals “essentially undervalued the company and its future prospects.”

The proposed legislation, which had been rushed to the Legal Department for review last month, could provide tools for the Cypriot government to block any friendly or hostile takeover in “sensitive sectors” of the economy in similar fashion to other European countries.

Previous reports said the executive board had posted notices in local newspapers calling on shareholders not to take action, but additional reports suggested some shareholders might want to jump ship if the price was right.

Reuters reported that the bank’s chief executive Panicos Nicolaou churned out a respectable 7.3% return on tangible equity in the first half of 2022, excluding one-off charges, with the banker gunning for a 10% next year.

But even though experts agree Lone Star could afford to pay more, Nicolaou’s ambitions were being weighed against the bank’s recent battles with high debt and ongoing ties to Russia.

Those factors were now being seen as somewhat less of a risk than previously, with a Reuters report this week saying this “helps explain why the bank has rebuffed three offers from Lone Star, the last of which valued it at almost 0.4 times tangible equity.”