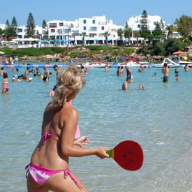 CTO Director General Marios Channides told CNA that in the past few years tourism from Ukraine has increased. Specifically in 2013 33.680 tourists from Ukraine visited Cyprus, with the growth rate reaching 76% compared with 2012. Channides said that recent contacts the CTO has had in Russia with the seven largest tour operators in the country confirm that this year will see a further increase in tourist arrivals compared to other years. He noted that "the only difficulty is the devaluation of the ruble against the euro." The objective is through the increase in tourist arrivals to support the economy, fight unemployment and back young people at work, he said.

In 2013, a year that Cyprus had a negative image in Russia because of the Eurogroup, 610,000 Russian tourists visited Cyprus recording a 28% increase compared to 2012, (more than 134,000 people in 2012). This year, with CTO contacts in Russia, these numbers would be even greater to the benefit of the economy, he said. Concerning the English market, after the decline in the number of tourists over the past few years, things are beginning to get better, Channides concluded.