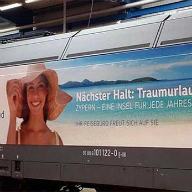 The Cyprus Tourism Organisation (CTO) has announced that it has begun an advertising campaign with German railway company Deutsche Bahn (DB).

DB is an extensive rail network in Germany and describes itself as the second-largest transport company in the world, after the German postal and logistics company Deutsche Post / DHL, and is the largest railway operator and infrastructure owner in Europe. It carries about two billion passengers each year.

The new deal between the CTO and DB will run into the winter holiday season of 2015-2016.

The advertisement posters on the trains are 10.90m in length and 1.86m in height and are emblazoned with the words ‘Your next stop – the holiday of your dreams. Cyprus – an island for all seasons’.

A CTO announcement read, “This initiative is deemed especially important because Cyprus will in this way be shown to millions of railway commuters every day. The CTO is continuously looking into other areas to advertise and promote the island especially in Germany.”