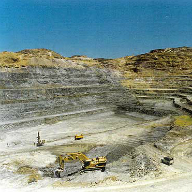 Officials from the Cuban Embassy in Cyprus recently toured the Skouriotissas mine, one of the oldest open pit copper mines worldwide and currently part of a new investment programme.

During the visit, Cuban and other members of the diplomatic corps in the country exchanged with Constaninos Xydas, Chief Executive of the company Hellenic Copper Mines Ltd., founded in 1994 and current owner of the mine.

Xydas explained the technological process used in mine production and noted that, after several years of research, the company chose the hydrometallurgy, which is based on the extraction of metals by using chemical reactions in aqueous solution.

He also said that, as part of an investment program, a new plant is being built and new researches on optimal production methods are under way.

The group also toured historical and geological sites and Cypriot experts addressed topics such as the origins and formation of the island 90 million years ago.