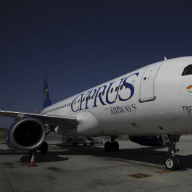 Struggling national carrier Cyprus Airways (CY) will start turning a profit by 2015 if the latest restructuring plan prepared for the airline is given the thumbs up in Brussels.

Last week, CY chairman Antonis Antoniou said he expected the response from Brussels to come in October, after which the airline will know where it stands and can proceed accordingly. The latest restructuring plan, prepared by KPMG London, reportedly includes the downsizing of the CY fleet to five A320 planes, plus a sixth A320 to be used as a back-up. It also provides for further staff layoffs, beyond the 490 employees the airline is already committed to losing this year.

Antoniou has recently suggested a further 117 employees could go in 2014, taking staff numbers to 385, from the 1,000-odd working at the company in recent years. The reduction implies that the company’s in-house catering department will be outsourced under the new plan. According to reports in local news media, for those that remain would have to accept a 10% wage reduction, and subsequent freeze in wages until 2018. At the same time, the airline’s contributionto the workers’ provident fund will be reduced from 9% to 5%.

The above calculations, however, are based on the Cyprus problem remaining unsolved. Should there be a solution to the decades-old division, the ban on flights over Turkish airspace will be lifted, and CY will no longer get around €5m a year in compensation from the government. Also, it would remain to be seen what kind of impact the opening up of Tymbou (Ercan) airport to international flights would have on CY, in terms of the extra competition that this would likely bring to airlines offering flights to and from Cyprus. Asked about the content of the restructuring plan, the CY leadership yesterday said it would make no comment on the matter.