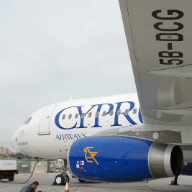 Ministers have approved the sale of one of the two night flight time slots Cyprus Airways has at Heathrow airport, which could provide a boost for the ailing carrier.

According to permanent secretary of the communications ministry Alecos Michaelides, the joint committee for privatisations recently decided to go ahead with selling the time slot, despite heated reaction from the airline’s employee unions. The committee consists of the ministers of communications and works; finance; labour; commerce and industry as well as high ranking officials and technocrats from within the ministries. “There is an initial agreement for selling the time slot. It will give the company liquidity until summer 2014,” Michaelides said.

Cyprus Airways workers unions consider the selling of time slots casus belli, as they have said in the past that it only “aims to weaken the company and facilitate privatization plans”. However, the joint committee reportedly estimates the time slot is worth around €15 million. Cyprus Airways was one of the semi governmental organisations included in the privatisation road map approved by the government. The airline posted losses of €55.8m for 2012, doubling its 2011 losses of €23.9m.

The European Commission is expected to decide within the next few months whether the restructuring plan for Cyprus Airways, proposed by the government, is viable and whether the government violated EU state aid rules by previously providing millions to keep the airline afloat. In March 2012 the EC said it was looking into whether Cyprus authorities were acting within EU law when they gave CY over €100 million via a €73 million rescue loan in December 2012, and a €31.3 million contribution to a capital increase in early 2013.