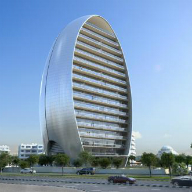 Situated in the heart of Limassol, just 100 metres from the sea and the Limassol Nautical Club, construction of The Oval has already begun. Changing the face of the city, the iconic building is a landmark structure on the Limassol skyline. Standing tall at 75 metres, it will be the highest commercial development in Limassol, further enhancing the area’s image as an international business centre. It is scheduled to be completed by the end of 2016.

With an investment exceeding €25 million, foreign funds for The Oval’s fruition have already been secured by strategic investors. In his address, during the project’s official launch, the President of Cyprus congratulated Cybarco, saying that "The Lanitis Group and its companies continue to make a positive contribution to our society and economy. Cybarco is renowned for the development of exclusive projects that have always attracted the interest of investors from Cyprus and abroad. The Oval is yet another example of this on-going success story."

The Chairman of the company’s Board of Directors, Mr Platon E. Lanitis, thanked everyone for their work on the project to date and made reference to the business community’s efforts to deal with the challenges of the current economic climate, stressing that "under these difficult circumstances, the Lanitis Group and particularly Cybarco’s response to these new challenges is the fruition of development projects, one of which is The Oval”.

The project consists of 16 floors with uninterrupted sea views. Each floor offers flexible open plan design, making it simple to adjust to the requirements of any business. Levels 14 and 15 are expansive Executive Office floors, which have exclusive access to a specially designed roof terrace on the 16th floor. The project’s distinctive design is complemented by the luxury reception areas on the ground floor, the landscaped gardens and the cafeteria, as well as the services offered which include property management, 24-hour security and controlled access to both the building’s premises and the two underground parking levels.

Internationally acclaimed architects Atkins, in collaboration with WKK and Armeftis & Associates, have created a landmark project with a distinctive shape that stands out in every sense. With an energy performance certificate of ‘A’ rating, the project is a sustainable development using geothermal energy to minimise carbon emissions. As also stated by Mr. Michalis Hadjipanayiotou, Chief Executive Officer of Cybarco Development, "the selection of the team that has created The Oval guarantees the completion of a world-class designed building, appealing to companies with a desire to stand out".

The Oval is the creation of Cybarco, Cyprus’ leading luxury property developer. Part of the prestigious Lanitis Group, since 1945, Cybarco has earned its reputation for outstanding quality and customer satisfaction delivered to the highest standards. The company is behind many of the island’s landmark projects including Akamas Bay Villas, Sea Gallery Villas and Limassol Marina, the country’s first residential Marina project. For more information or to arrange a bespoke viewing, dial 8000 50 30 or visit www.cybarco.com