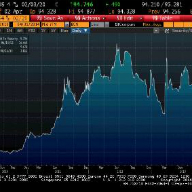 Cypriot ten-year bond declines to the lowest point since March 2012, reflecting the improvement in the economy's fundamentals and public finances.

The yield on the ten-year bond maturing on 2020 declined to 5.6% from the all time highest point of 16.4% reached in June 2012, when the island’s banking sector teetered the brink of collapse.

Excluded from the international capital markets since May 2011, Cyprus applied for a bailout in June 2012 to avert the collapse of its banking sector and cover its financing needs. The €10 billion bailout agreed last March however featured the unprecedented bail-in of uninsured deposits, coupled with capital controls, which plunged the economy into deep recession.